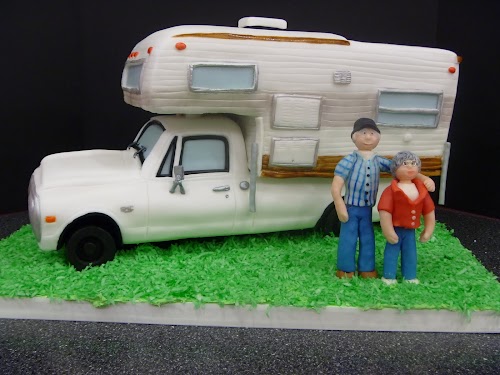 Well, I don’t know about you, but my month has sure been busy! Between throwing three parties in the last four weeks, enjoying company, celebrating the 4th, fighting sickness and now packing to get ready for a trip to Baltimore to visit Charm City Cakes, I have hardly had time to catch my breath!

I haven’t had time to post anything in the last few weeks so I am taking a few minutes to share some pictures from the cake I made last weekend to celebrate my parent’s 40th wedding anniversary. Their anniversary isn’t actually until July 21st but I wanted it to be a surprise party so we celebrated on the 16th. No one has ever passed off a surprise on my dad before so I was so nervous that we wouldn’t be able to pull it off. All of our hard work, and tongue biting paid off though, and my parents were completely surprised. It was a moment I will never forget!

For such a momentous occasion I had to make a very special cake. I went back and forth trying to decide whether to do something elegant and wedding style or something 3D. My parents eloped 40 years ago so they never had a wedding and I thought it might be nice to finally give them a wedding cake. But, then again, the reason my parents eloped is that neither of them has ever liked the formality or attention that a wedding ceremony provides. I finally decided that a 3D cake would probably mean more to them and be remembered longer by all the guests than a wedding cake.

Immediately, I knew what I had to do for the 3D cake; my parent’s truck and camper. They bought a white 1972 GMC truck and white camper right after they got married in the fall of 1971. They still have both the truck and camper and still use them! A few years ago my dad and mom met up with some old friends and brought their truck and camper. The men (now on their second and third marriages) started giving my dad a hard time about the fact that he still had that old truck and camper. His response was “Well, I still have the same wife too.”

Everyone who knows my mom and dad know about their truck and camper and many of their friends share lots of memories that revolve around that truck and camper. So that was what I had to do for their cake. Here is the finished cake.

Front of the cake 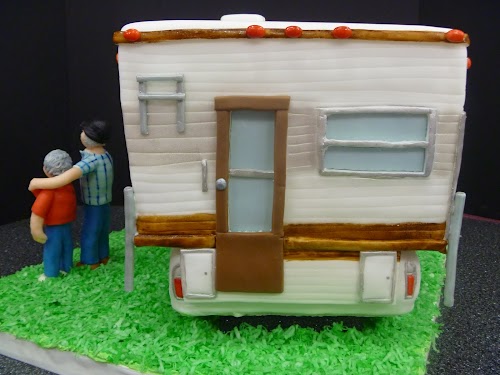 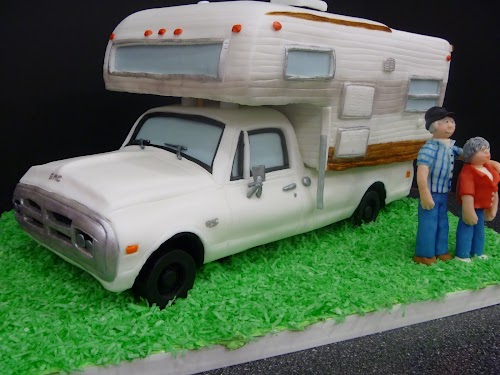 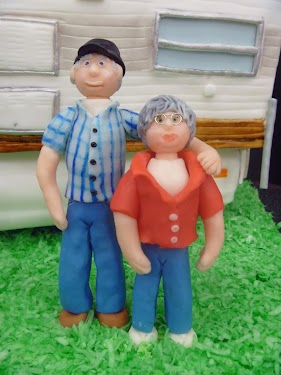 Close up of my parents sculpted in modeling chocolate

I wanted to take a lot of pictures to share the process I went through to make this cake but, after the first few steps I got so consumed in what I was doing that I forgot to take them. I will share with you what I have though.

I started off by getting lots of pictures. I went over to my parents house when they weren’t home one day and took lots of pictures of their camper. Unfortunately, their truck was in the repair shop so I had to look online for pictures of it. I found some I could use but was still in need of some measurements. We happened to be driving by the senior center one day, when we saw a similar truck in the parking lot. My husband ran in and found the owner and asked if we could take pictures and measurements of it. He graciously said “yes.” It is crazy the things we cake people will do to make a cake!

After accumulating my photos and measurements I used my copy machine to enlarge them to the sizes I wanted so I could use them as patterns. This is a technique I learned from Mike McCarey on his Cakenology DVD. I also hung up pictures on my magnet board to use as reference while I was working. 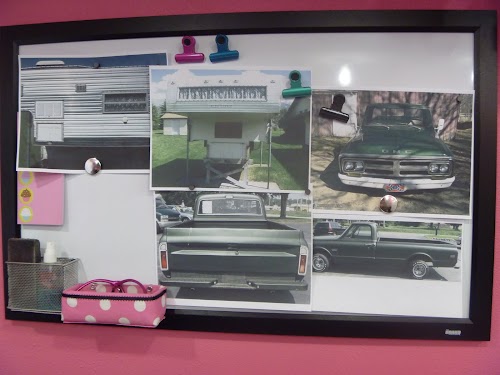 I started with the truck by cutting and stacking cakes to get the size I needed to carve from. 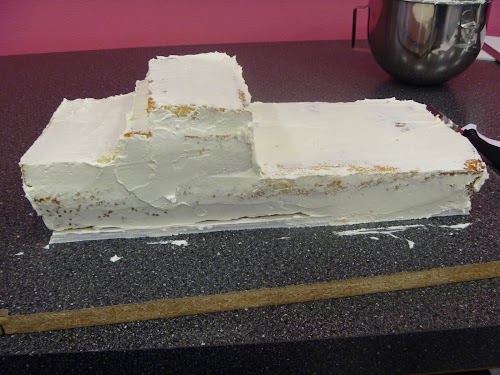 I then attached my pattern to the side of the cake with a little buttercream icing and started to carve away. After it was completely carved to my liking, I covered the whole cake in another thin layer of buttercream and let it set up in the refrigerator.

I then added pieces of modeling chocolate in various places. Some of it was used to add dimension under the fondant; and other pieces were so that I could later cut the fondant away and reveal them. 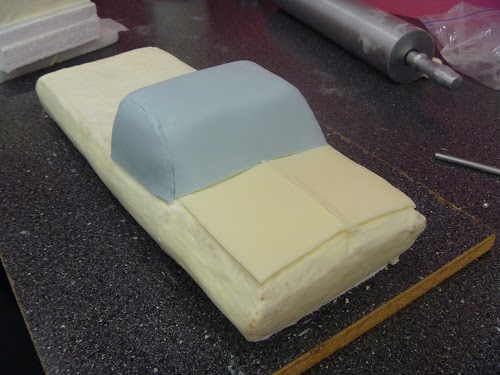 Once all the chocolate was added, I covered the cake in fondant and used my hands and various modeling tools to make the dimension of the chocolate stand out. 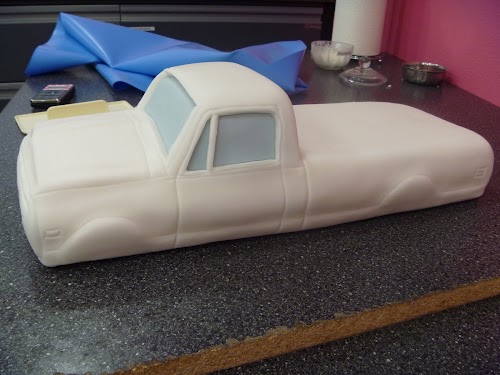 When I moved on to the camper I used foam board to build a support frame for it to sit on. The part that hangs over the truck needed some support so I stuffed styrofoam under it while I was working on it. I later used dowel rods to support it when it sat on the truck.

The carving techniques were the same as I did for the truck. 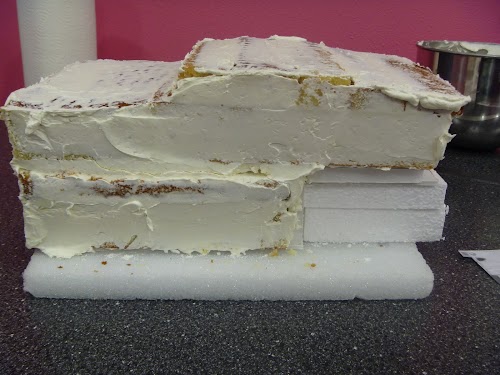 I started with a mound of stacked cakes. 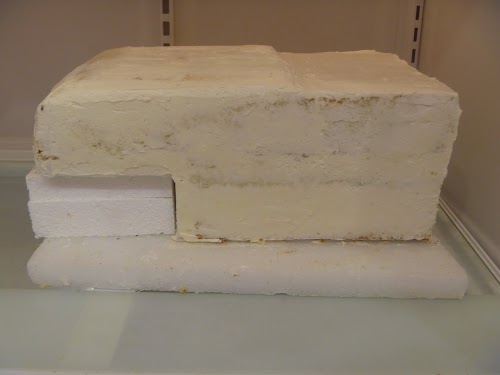 After they were carved I gave them a thin coat of buttercream.

It was at this point that I completely forgot to take any more pictures until the very end. In a short summary, I basically finished covering the camper in fondant then used modeling tools, luster dust, modeling chocolate and food coloring to add all the details on to the cakes.

When they were both complete, I raised the truck up on a piece of styrofoam that I had spray painted black and attached modeling chocolate wheels in the wheel wells. I then prepared the cakes for stacking, using dowels and straws, then placed the camper on top of the truck.

I, of course, needed to add my mom and dad on to the cake so I sculpted them in modeling chocolate on to skewers. 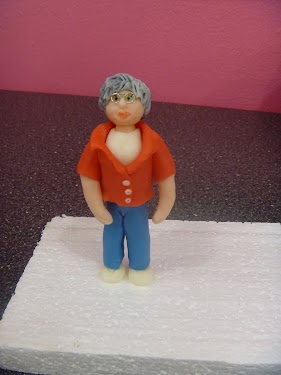 Mom, her glasses were made of wire and were the only inedible thing on the cake. 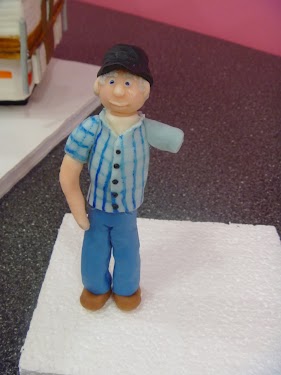 Dad, I couldn’t finish his back arm until he was in place on the cake board.

I used another skewer to make holes in the foam cake board and then added some melted chocolate in the holes and stuck my figures next to each other. To finish it all off, I covered the whole board in green royal icing and add some coconut that I had also dyed green.

It ended up being one of the highlights of the party. 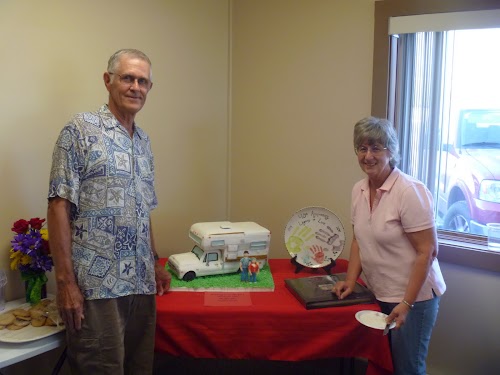 My dad and mom with their cake.

They even cut it up and served each other like a couple of newlyweds. 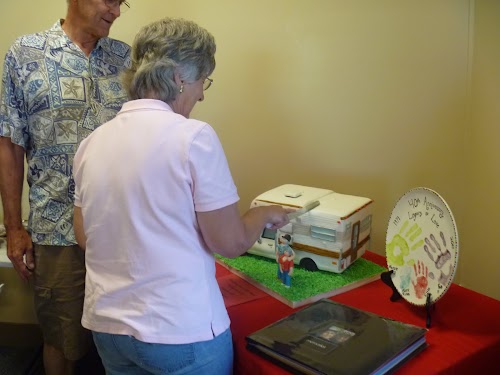 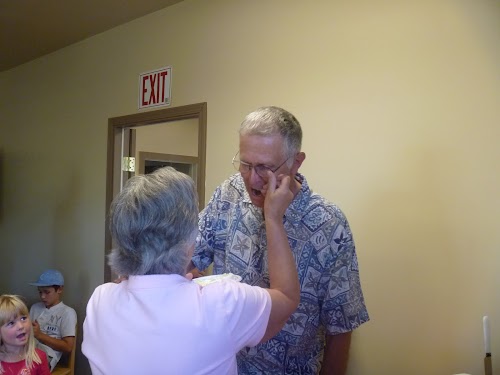 It really was one of those moments in life that I will always remember.

I feel so blessed that I could honor my parents with a surprise party and a special cake. And I feel especially blessed to have such amazing parents who have made it through the hills and valleys of 40 years of marriage. I hope and pray that my marriage will have the same strength and longevity as theirs. Thanks for being such an amazing example mom and dad!

By the way, if you are interested in learning how to make car cakes of your own, I highly recommend you buy Mike McCarey’s DVD, Cakenology. It is an incredible DVD with very detailed instructions. Mike is a wonderful teacher.