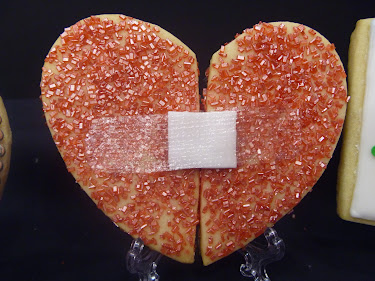 So I realize that an edible bandage isn’t something you plan on making every day but, after sharing my Old Lady cookies with you last week, I wanted to teach you how I made the bandage on the broken heart.

Here is the batch of Old Lady cookies I made for my friend, Paula Ames’, birthday and shared in last week’s blog entry. 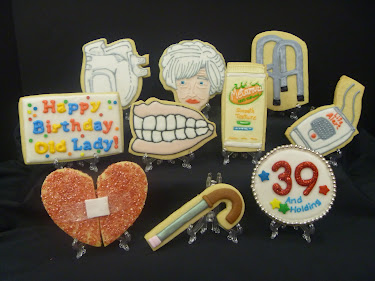 There is a story behind the broken heart but you’ll have to read last week’s entry to find out what it was.

To create the edible bandage I tried a new technique, using gelatin. I took 2 Tablespoons of Knox unflavored gelatin

and mixed it with a half cup of water in a glass measuring cup. One packet of gelatin contains about 2 ½ teaspoons so I poured out 3 packets and measured the amount I needed from them.

I let the gelatin bloom in the water for 5 minutes then placed it in the microwave and heated it for about 20 seconds or so, until it was warm and liquid. I mixed in some flesh toned food coloring to give it a little color. I used airbrush food coloring

but you could also use paste colors

. The one thing I wish I would have done was added a bit more coloring than I did. As you can see in the picture, the color gets strong fast (I think that was only a drop or two) but I didn’t realize that once I thinned out the gelatin the color would greatly lighten, almost to the point of being unable to see it. 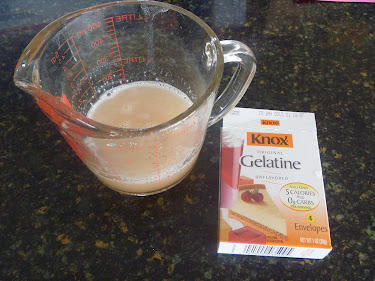 I wanted to get all the impurities out of the gelatin so I let it cool enough for foam to collect on the surface. I then took a spoon and skimmed off as much as possible. When the foam was completely removed I reheated it in the microwave to thin it back down.

Bandages have a bumpy texture on them so I wanted to try to replicate that look by using a Patterned Dots texture sheet that I got from Cakeconnection.com. With a pastry brush

I applied a thin layer of gelatin on the sheet then let it set overnight to dry completely.

The next morning the gelatin had mostly separated from the sheet and I was able to easily peel it completely off. It had turned into a sheet of gelatin-type paper. 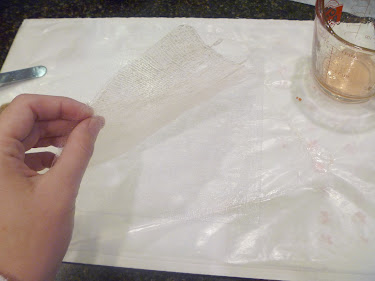 I was then able to place an actual bandage on top of the sheet, outline around it with a non-toxic pencil and cut it out with a pair of scissors.

To make the white center part, I thinly rolled out a piece of fondant

and cut out a small square.

Finally, to attach it to the cookie, I used some piping gel

This was the first time I had tried this technique and I was really happy with how well it worked. In fact, Paula told me she thought it was a real bandage until I informed her otherwise. I’m sure I will come up with other uses for gelatin sheets in the future. Let me know if you’ve used gelatin on your cakes or cookies and in what form.