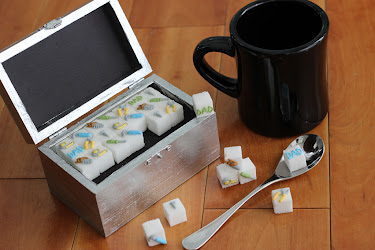 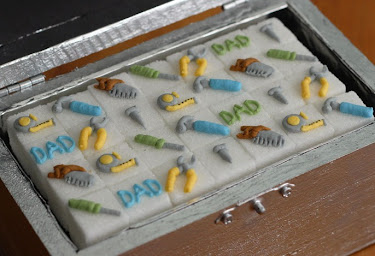 Maybe I am going out on a limb here, but while I was making the springtime sugar cubes for my blog entry A Little Sugar for Teatime, I started thinking about how sugar cubes are always considered dainty and feminine and began wondering what it would be like to make a manly sugar cube. We often associate decorated sugar cubes with an elegant tea party but men also use sugar in their drinks so why aren’t there any cubes out there that would appeal to the testosterone bearing creatures of our species? I decided to create my own.

I present to you the very manly, tool-themed, decorated sugar cubes: 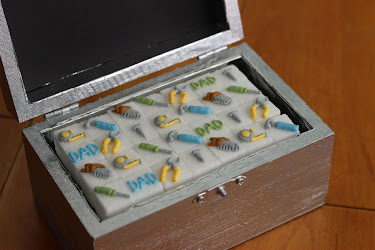 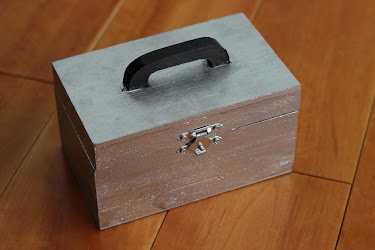 What dad wouldn’t love to take a tool box full of sugar cubes to the job site with him? 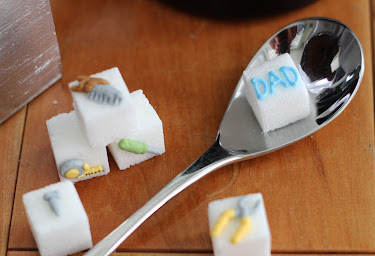 Here are instructions for the specific tools on these cubes. 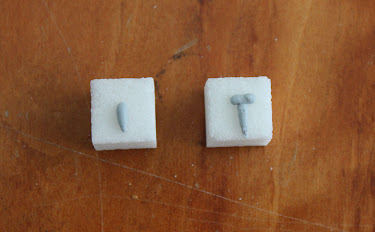 1. With gray icing and a decorating tip #3, start in the middle of the cube and pipe a line down towards the bottom of the cube, releasing your pressure as you get to the bottom so that it gives the line a point.

2. Pipe a horizontal line across the top of the vertical line to make the head of the nail. 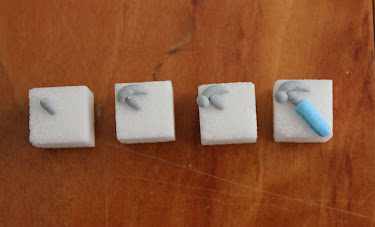 1. With gray icing and a decorating tip #3, pipe a small line in the upper left corner of the cube.

2. Pipe another line on top of the first line, curving it over the first and releasing your pressure at the end to give it a point.

3. Hold the tip in place at the front of the curved line and pipe a dot for the head of the hammer.

4. Switch to blue icing and a #3 tip and pipe a handle for the hammer, squeezing slightly heavier than you did for the top of the hammer so that it is a little thicker. 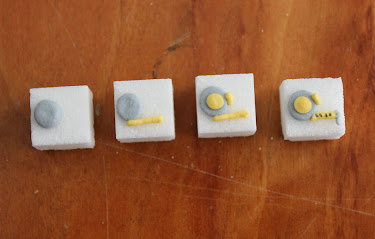 1. Begin with gray icing and a decorating tip #4. Hold the tip directly over the cube, at the left side, and pipe a flat ball. Use your finger to gently pat it down.

2. With yellow icing and a #2 tip, pipe a line from the bottom middle of the ball out toward the right side of the cube.

3. With that same tip, pipe a flat ball on top of the gray ball and add a small line for the lock.

4. Use gray icing and a tip #1 to add a small line at the end of the yellow tape line. Finish by adding black measurements with an edible marker 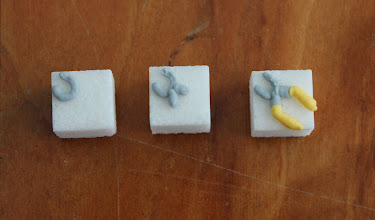 1. With gray icing and a decorating tip #2, pipe a backwards “c” in the upper left corner of the cube.

3. With yellow icing and a tip #2, pipe two handles coming out of the gray lines. 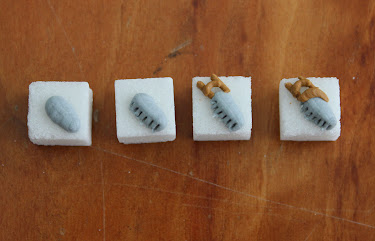 1. With gray icing and a decorating tip #4, pipe the blade of the saw, starting at about the middle of the cube and angling down toward the lower right corner. Lighten your pressure as you go to make the blade thin out.

2. Take a toothpick and pull it through the edges of the blade to create teeth.

3. With brown icing and #2 tip, add two lines coming out of the blade and a rounded line attaching to them.

4. Finish by piping a curved line over the top of the blade, coming part way down the back of the blade. 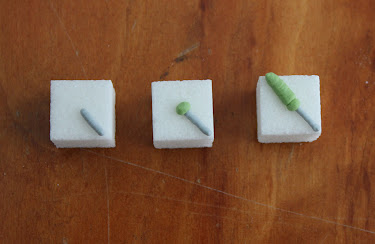 1. With gray icing and a decorating tip #1, start at the middle of the cube and pipe a thin line toward the lower right corner of the cube.

3. Make the handle by piping a line from the ball to the upper left corner of the cube. 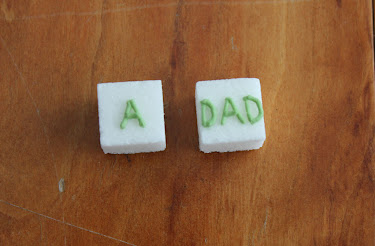 1. Start with blue or green icing and a decorating tip #1. When writing a word, it makes it easier to center if you start with the middle letter, so pipe an “A” at the center of the cube.

And let’s not forget the adorable tool box that displays all these manly sugar cubes. To make the tool box, I found a little wood box at my local craft store. I also used some chrome spray paint

and some black craft paint 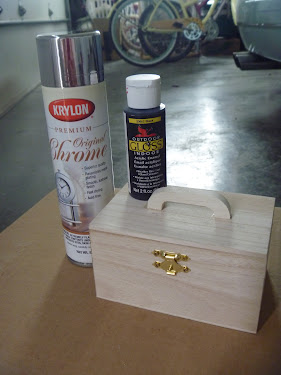 I spray painted the box, inside and out with the chrome paint. When it had dried I used the black craft paint to paint the handle.

I also didn’t want the sugar cubes touching the painted areas so I lined the inside of the box with foil. 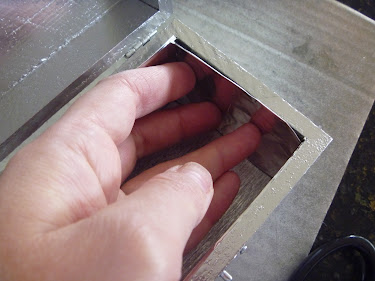 I wanted the cubes to be level with the top of the box when it was opened so I took a piece of styrofoam, covered it in foil, and placed it inside the box to use as a shelf for the cubes to set. 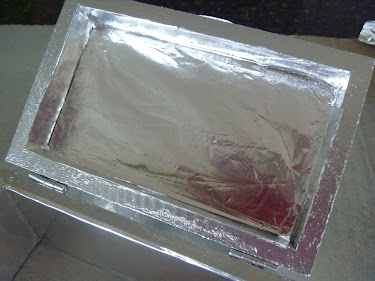 Here is the box before I placed the cubes inside of it. I also ended up adding some black card stock in the top of the lid and on the shelf in order to give contrast to the white cubes and set them off nicely in the box. 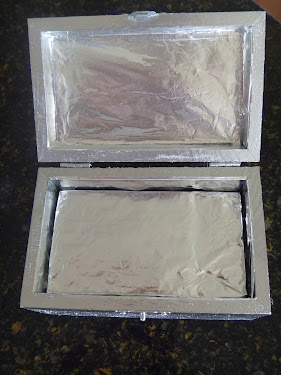 I was so excited at how cute this project turned out that I started brainstorming all sorts of different “male” designs that I could do in the future. I think I could start a whole new trend!

Happy Father’s Day to all those wonderful dads out there.