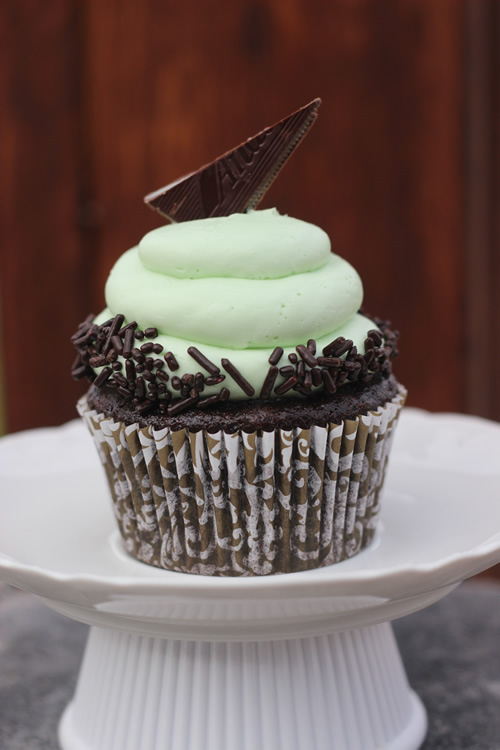 A couple of weeks ago we had a potluck at church. I always get excited for potlucks because they give me an opportunity to make a new dessert without having to worry about it sitting in my house and tempting me to eat it for the next several days. I decided to try grasshopper fudge cupcakes.

I remember the first time I ever heard of grasshopper cake. I was probably six years old and I was completely disgusted that someone would make a cake out of grasshoppers! It was a great relief to discover that the term “grasshopper” simply referred to a cake or pie that is chocolate mint flavored.

To make these into grasshopper cupcakes I decided to make a mint chocolate flavored cupcake with a mint buttercream icing and then fill it with a fudge filling, to balance out some of the mint. I have a Chocolate Fudge Butter Icing recipe that I really like so I knew I would use that for the filling but I have never made mint cake or mint buttercream before so I went searching for some new recipes. My first stop was my Martha Stewart’s Cupcakes book

. It didn’t let me down because I found both recipes in there. I love Martha’s Cupcakes book, it is filled with so many neat decorating ideas as well as some really tasty cupcake recipes. I like it so much that I am going to give away a copy of the book to one of my readers next week so keep reading to find out how to enter my drawing.

One thing to keep in mind when it comes to Martha, is that her recipes always seem to be a bit more complicated and time consuming than most. The cake recipe wasn’t too bad but the buttercream recipe took much longer than most of my icing recipes. I feel like it was worth it though. It had a nice fresh mint flavor that you just can’t get with extract alone. Overall the cupcake had a fairly strong mint flavor. If you are a mint lover, like me, you will like it but if you want something a little milder you could also just make a regular chocolate cupcake and use the mint buttercream or make the mint cake and use a regular buttercream.

Click on the links below for printable versions of all three recipes.

when you are making the cupcakes and icing. I was out of peppermint extract but found some mint extract

in my cabinet and decided to just use that on my first batch. Big Mistake! Mint extract has spearmint in it, which is a different taste than peppermint. They ended up tasting like toothpaste. I had to throw that batch out, make a trip to the store and start again. Learn from my mistake.

Once I made all the cupcakes I added Andes mints

as toppers then displayed them in a cupcake stand

. Don’t they look pretty and tasty? (*Note* The cupcake stand in the link is a 4 tier stand. It doesn’t appear that Wilton makes the 3 tier stand, as seen in my photo, anymore.) 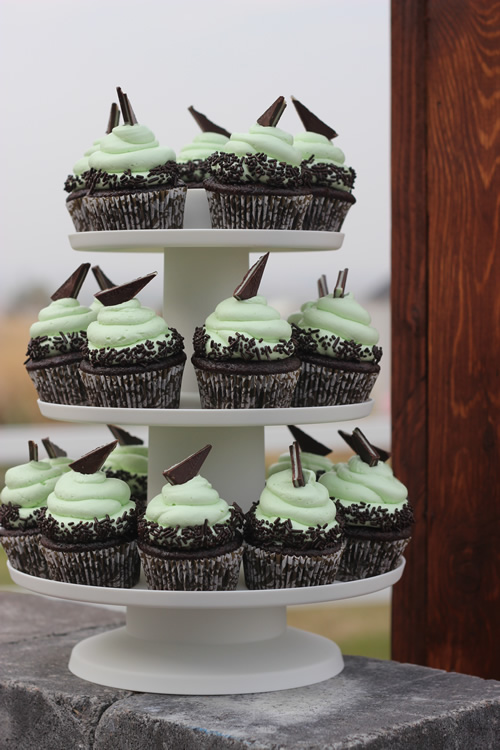 And here is what they looked like on the inside with the fudge filling. 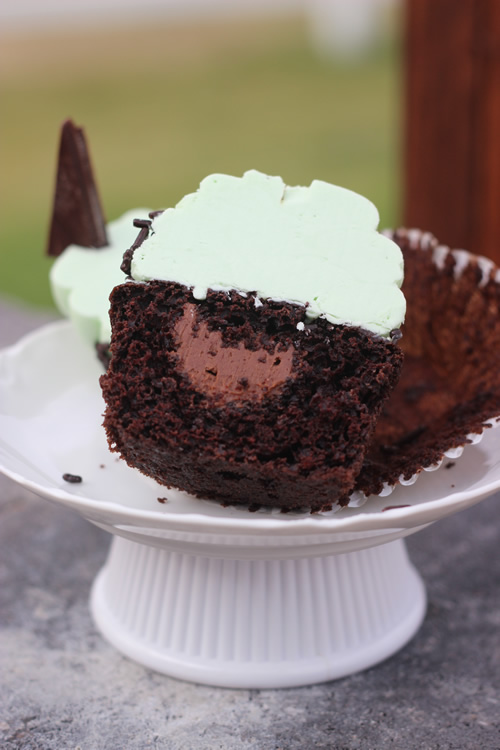 If you have never filled a cupcake before you can check out my blog entry on Chocolate Covered Strawberry Cupcakes for instructions on how to easily do this.

I took some pictures of me decorating the cupcakes. They turned out pretty blurry because it was at night but I still want to include them so that you can see how I did it.

The mint buttercream icing is a white icing but I wanted it colored minty green so that it would have more of an appearance of being mint flavored. To do this I colored it with a small amount of Wilton Kelly Green icing color

After the cupcakes were cooled and filled, I used a decorating bag

. I swirled one layer of icing on the top of the cupcake. 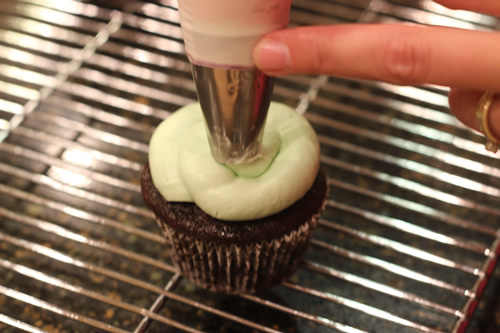 Next I poured some chocolate jimmies

(some may refer to these as sprinkles) on a plate and rolled the cupcake so that the edges of the swirl pressed into the jimmies. 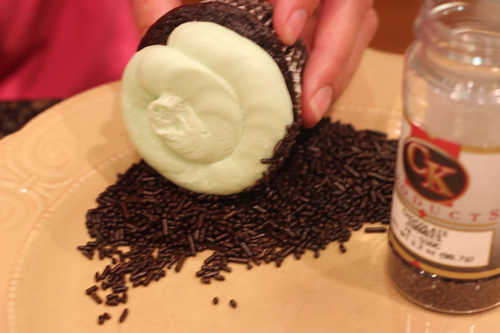 Then I swirled another layer of icing on top of the first. 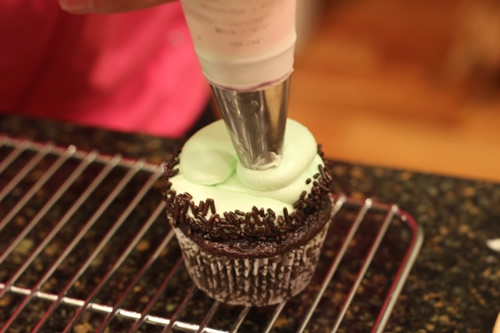 And finished off by cutting an Andes mint

in half, at an angle, and placing it on top of the cupcake. 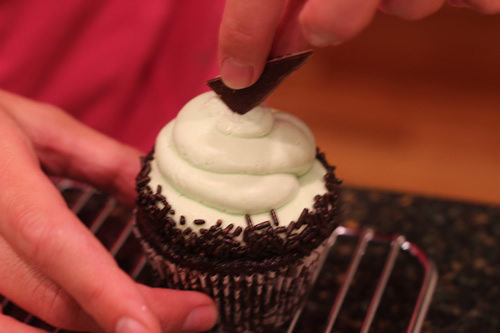 And, once again, there is the finished cupcake. Isn’t it beautiful? 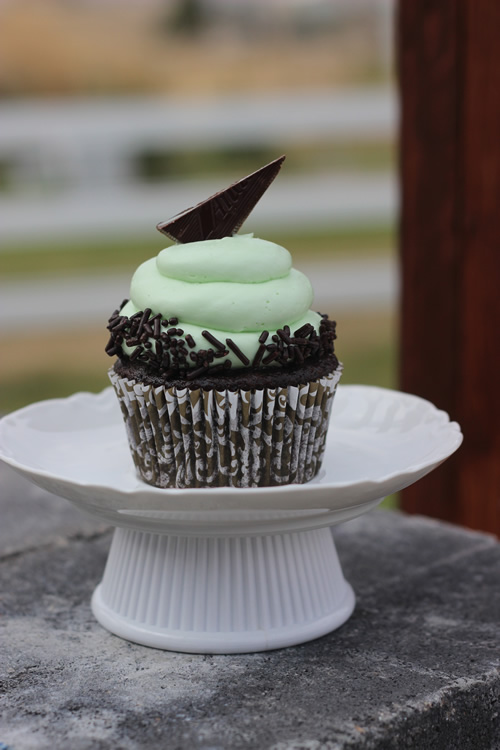 If you like the flavors of this cupcake I highly recommend trying out some of Martha’s other cupcake recipes too. Here is her Cupcakes book that I was talking about. 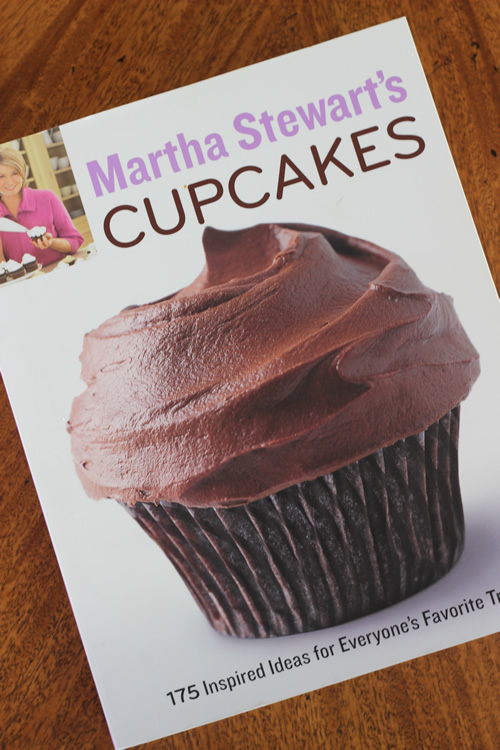 I am going to give away a copy of this book to one of my lucky readers next week. If you want to be entered into my drawing, leave a comment at the end of this blog entry telling me what your favorite candy is. I will also give you a second chance to enter by liking my Facebook page and leaving me a comment (any comment) on my FB wall. You have until Monday, October 1st at midnight, MST, to enter. I will announce the winner on Tuesday, October 2nd. Good luck everyone!