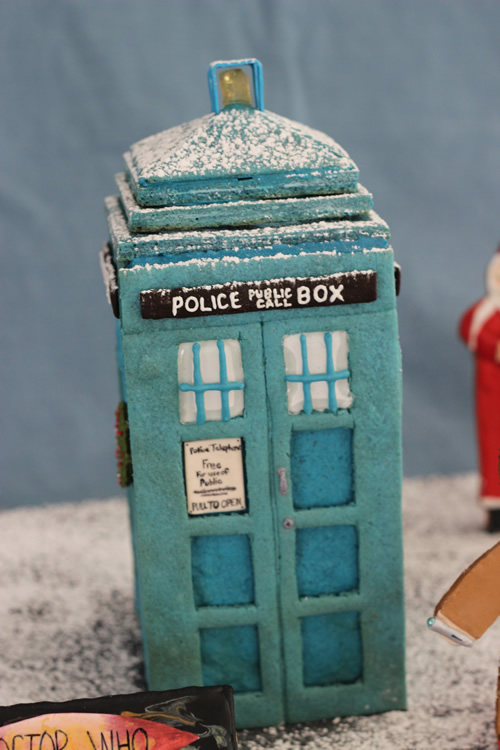 Note: From the time my girls were able to start holding a spoon, I have been placing decorating bags in their hands. Now that they are teenagers I am amazed to see how their talent and creativity has developed. Today I am letting my 14-year-old daughter, Kenzie, guest blog on her Doctor Who gingerbread creation for our annual local gingerbread competition in which she won first place. Without further ado, here is Kenzie…

There I was, sitting around, thinking about what I could enter in our local gingerbread house contest this year. I thought for about 10 seconds when suddenly…

… the little police box light bulb went off in my head. “I’m going to make the TARDIS!”

Now, any Whovian knows that the TARDIS is never without The Doctor, and The Doctor is rarely without his companion. So the designing began and my creation was born. Ladies and gentleman, I present you with: 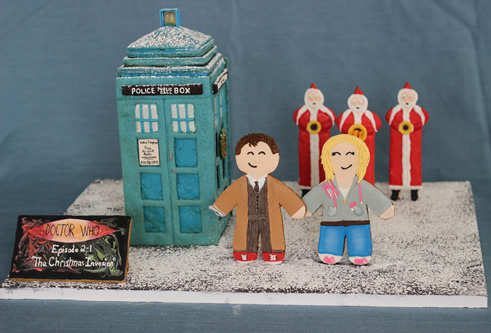 I understand there are some of you who have never seen Doctor Who, and you’re probably staring at this picture in completely confusion. Here’s what you should know to understand what’s going on here:

-The main character, The Doctor, is the one in the long coat and great hair. He’s an alien (that looks just like a human) that travels through time and space with the TARDIS.

-The TARDIS is the blue police box. It’s a time machine. Despite how small it looks on the outside, it’s much bigger on the inside. It is disguised as an old London police box to blend in with its surroundings.

-The girl is Rose. She is my favorite of the Doctor’s companions. The Doctor likes to travel with company to keep from getting lonely, and so Rose travels with him in the TARDIS.

-The Santas are actually robots that are killing people with their flame throwers that are disguised as trumpets so that they can take control of the Earth.

-This is all based on a specific Christmas episode called “The Christmas Invasion.”

-“Whovian” refers to a Doctor Who fan.

I realize how ridiculous that all may sound, but it really is a fantastic show. 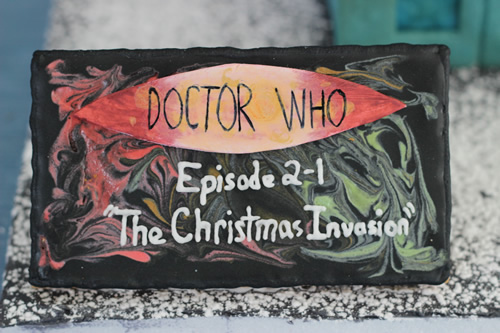 The Santas, along with the rest of the display, are made of gingerbread. To get the right “killer Santa shape”, I played the episode on my laptop and took a screen shot of a certain scene where you can see the Santas straight-on. I printed that screen shot, and cut out one of the Santas. I used that as the pattern for all three gingerbread cookies. It took a little resizing with our copy machine to get it to the right size. Here is a tutorial that explains this process better.

When the gingerbread was all cooked, I took a pencil and drew out the outlines of the clothes, faces, and trumpets directly onto the gingerbread. This helped me see where to pipe out the icing, which is much easier than eyeballing it off a blank piece of gingerbread. The trumpets and flames are made of gumpaste and powdered with black luster dust in the centers. I laid the trumpets over icing tips while they dried to give them a round, 3 dimensional shape. The flames are attached to the trumpet with melted isomalt 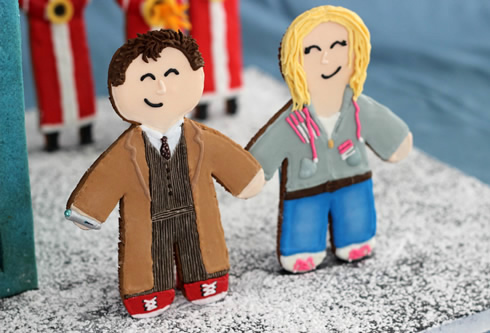 Ah, the Doctor and Rose. The two that believed in each other even when they didn’t believe in anything else. I had a really fun time making these two; partially because they are pretty much the greatest people ever, but also because there was a lot of fun detail work to do. I didn’t want to use a basic gingerbread man cookie cutter for their shape, because they would have looked much too fat. And everyone knows that the Tenth Doctor is so skinny, you could get a paper cut from hugging him. So instead, I used the outline of the gingerbread man from Shrek, and printed his picture out the same way I did for the Santas. 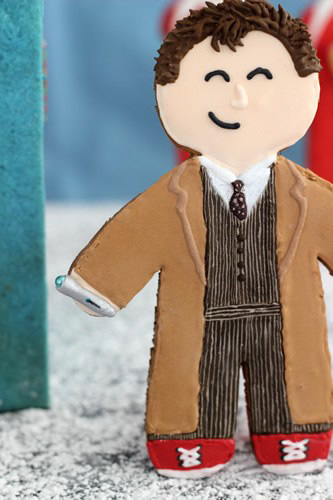 After dozens of regenerations and many new looks, the Doctor always has to ask one, very serious question… “Am I ginger?”
Now I can say that the Doctor is, in fact, finally ginger! Well, gingerbread, that is. As I was decorating my gingerDoctor, I thought to myself…

Hmmmm, this could be a little more sonic…

So I grabbed some gum paste

. After a few hours of dry time, The Doctor’s sonic screwdriver was ready to go! It was then time to do the detailing on his suit. I used a tiny paintbrush and a light blue food coloring/vodka mixture to paint the stripes on his suit and the shapes on his tie. It was a little time consuming, but I had fun seeing him come together piece by piece. 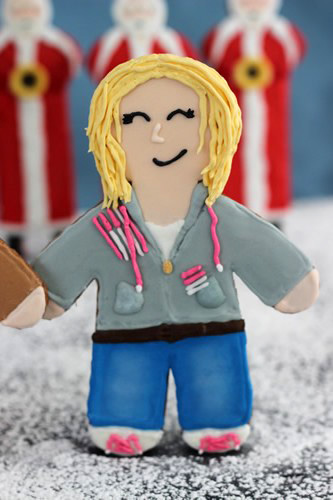 I based Rose’s outfit on the one she was wearing in the episode. I wanted her jeans to look less like mom jeans and more like the ones she is wearing on the show, so I dusted some white petal dust

on them to give them a faded look. 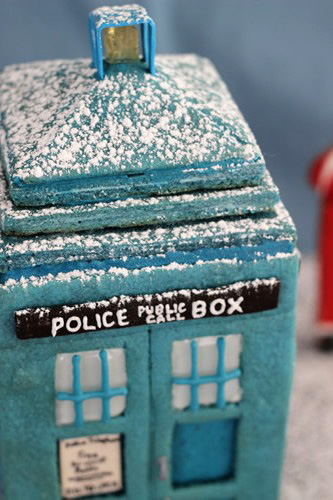 The TARDIS. “Time And Relative Dimension In Space” Unfortunately, it’s not bigger on the inside, but it is pretty darn cute on the outside. 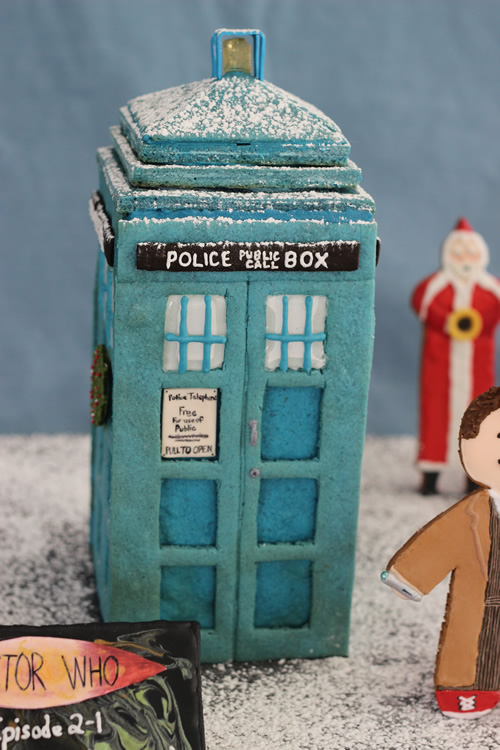 There are a lot of aspects to this structure. Each wall has two panels: a solid back one and a thinner front one that has all the windows cut out. The windows are made of isomalt, as well as the little “light bulb” on top. The police box signs are also gingerbread, with piped out lettering.

The cover over the light bulb is a piece of gumpaste cut like the shape below and dried over the top of a Tic-Tac box, with the legs hanging over the sides of it. 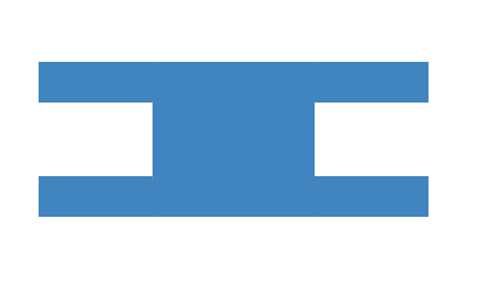 I wanted to get the dimensions of the TARDIS as accurate as possible so I searched online to see if I could find blueprints of some sort. I found some that a fellow Whovian had made for a full sized TARDIS prop he was building. Lucky me! I made a replica of the final product out of core board before cutting out the gingerbread. By doing so, I realized that my roof measurements were off and was able to redo them before finalizing it. 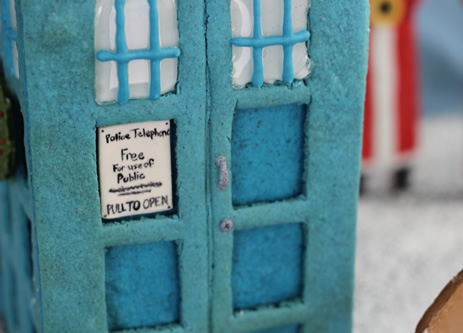 The “Police Telephone” sign is my favorite part of the TARDIS. It’s made of gumpaste with the lettering painted in black food coloring. The handle is royal icing that I piped onto the curved edge of a pencil, let dry, and then attached to the door. I carefully painted it with a luster dust/vodka mixture. The vodka eats away at the icing if you’re not careful, so I had to paint just two thin layers on it to keep it from falling apart.

To keep all the cookies standing upright, I stuck sticks of candy canes in the board and attached the people to them with royal icing. The Doctor and Rose each have two, and the Santas each have one. The contest rules state that all supports must be edible, so I couldn’t use dowel rods. Candy canes are much sturdier than pretzel sticks, although they are a bit difficult to cut.

*TIP* When cutting candy canes, leave them in the wrappers. This will help prevent them from breaking and sticking to your fingers. Also, serrated knives work best for cutting them. 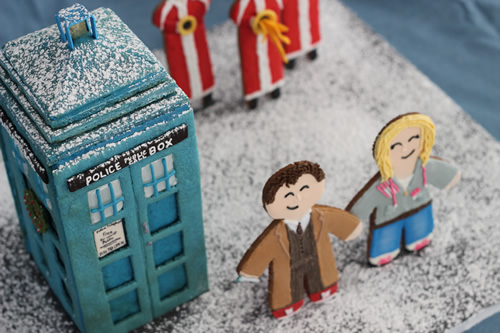 So, there you have it! “The Christmas Invasion: Ginger Edition.” I ended up winning first place, which was pretty exciting! But the best part was actually making it. I had so much fun with it!

Does this inspire you to make your own gingerTARDIS? Or maybe a gingerbread display from a different fandom?

If so, it’s time to get baking! Here’s a few tutorials from this blog on making gingerbread houses, including our much tried-and-true recipes for gingerbread and royal icing:

Thanks for reading, everyone!