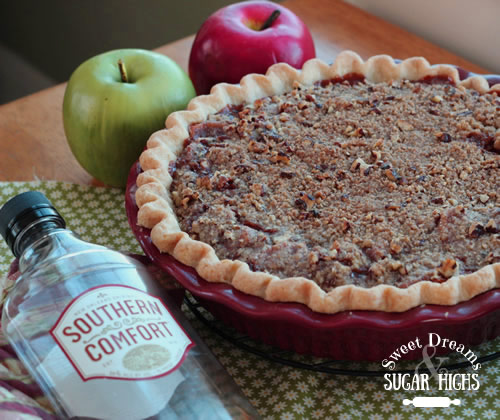 As much as I love decorating cakes, I have to admit that I prefer a piece of pie over cake any day. And when it comes to baking, I can’t think of anything I would rather bake than a homemade pie. There is just something about the challenge of forming a perfect crust and then filling it with fruit or other goodness that makes everything else right in the world. And then, when you serve it warm with a scoop of vanilla ice cream….oh man, I better stop before I salivate all over my keyboard.

A couple of months ago I was skimming through one of my favorite baking cookbooks, The Pastry Queen by Rebecca Rather

, when I came across her recipe for Southern Comfort Apple Pie. Now I have made a lot of apple pies in the past and I’m not really one to cook with alcohol much, since it is pricey and I don’t drink, but the recipe just stood out to me and was calling for me to try it.

Well, my small bottle of Southern Comfort was quickly used up and I had to return to the liquor store to buy their largest bottle because I love this pie so much that I have already made it 5 times in the last couple of months. Before you start making piggy noises at me, I want you to know that I did not eat all of those pies by myself, most of them I gave away as gifts because I wanted to share my new baking excitement with others. And since I can’t bake each and every one of you a pie (although I would be tempted to try) I thought I would share it on my blog so that you can make your own. If you like it I would suggest you go out and buy The Pastry Queen cookbook because all the recipes I have tried in it have been fabulous so far.

For a printable version of the Southern Comfort Apple Pie recipe, click here.

You will need a pie crust for this recipe, of course. I am not going to spend the time explaining how to make pie crust in this entry because that is something I hope to write about in a future entry, so just use your own recipe or, if you prefer, pick up readymade dough at the store. Make sure you use a deep dish pie plate and line it with the crust. (Update: Click here for a link to my tutorial on making pie crust.) 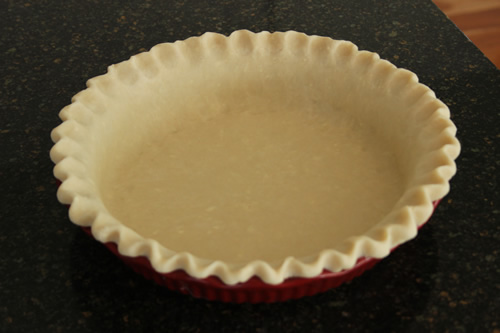 Although the recipe doesn’t call for it, I always blind bake (partial bake) my crusts before using them for any pie. This helps to set the crust and keep it flaky. I’ll explain that more in a future blog entry but I wanted to share that so that when you see later photos, and notice the crust looks already baked, you won’t wonder why.

You will also need ingredients for both the filling and the topping. 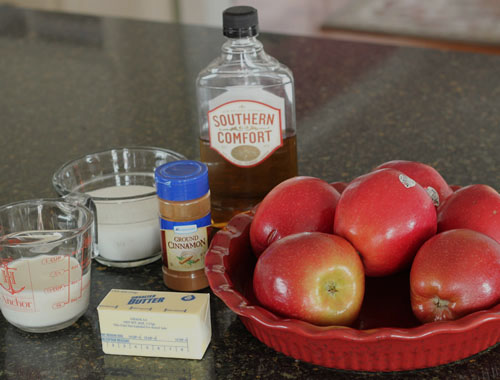 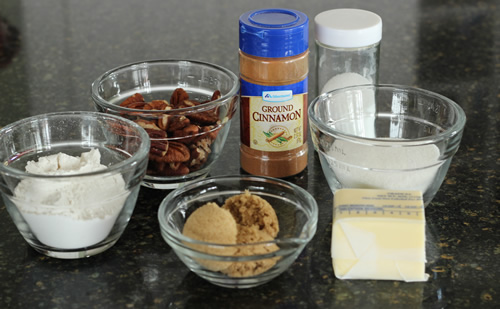 You want to make the topping first so that it has time to cool in the refrigerator while you prepare the filling.

1. Preheat the oven to 350 degrees then toast the pecans on a baking sheet until golden brown and aromatic. Allow them to cool then coarsely chop them.

2. In a food processor, combine both of the sugars, the cinnamon, salt and flour and process for about 1 minute. Add the small pieces of butter and pulse about 10-15 times to make the mixture crumbly.

Transfer the mixture to a bowl and stir in the pecans. Cover and refrigerate until ready to use.

2. Peel, core and cut the apples into ¼” slices. To do this, start by cutting off both the top and bottom of the apple to give it a flat surface. 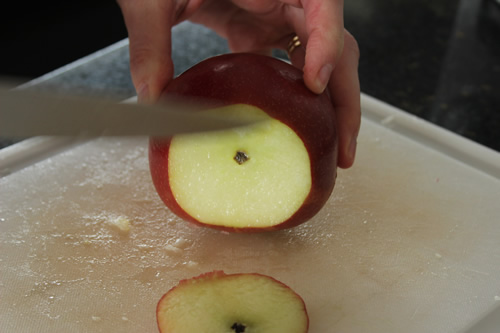 Then run the knife down the sides, along the curve of the apple, and remove all the peel. 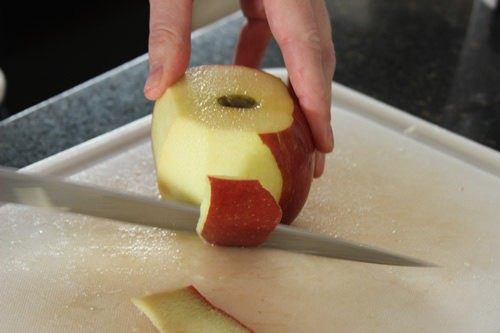 Next use a hand corer to remove the core. 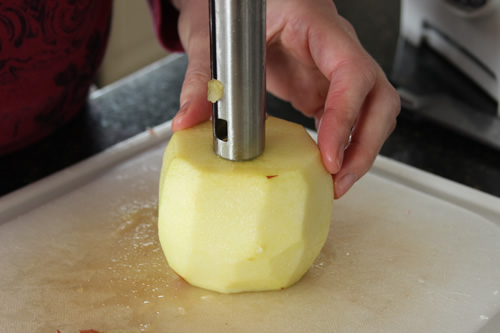 Finally, cut the apple in half and lay it down then cut ¼” slices. 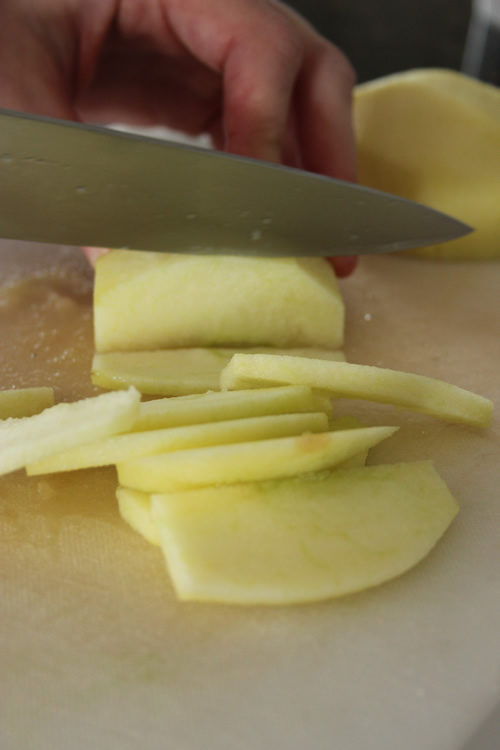 3. Melt the butter in a large skillet over medium-high heat. Add the apples and sauté for 5-8 minutes. 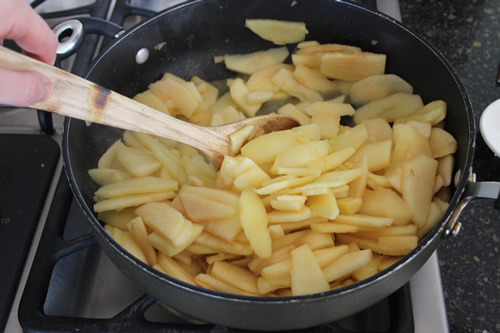 4. Combine the cinnamon and sugar in a small bowl then sprinkle it on the apples and stir. Simmer the apples over medium-low heat about 1 minute more. 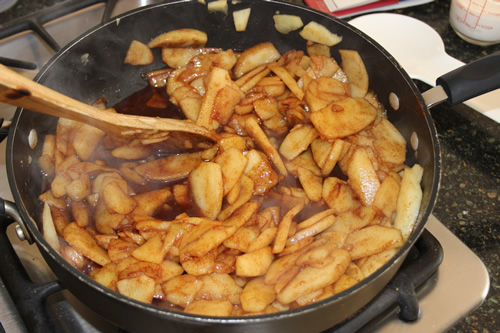 5. Remove the apples with a slotted spoon and spread them out on a baking sheet. Try to leave as much of the butter-sugar mixture in the skillet as possible. 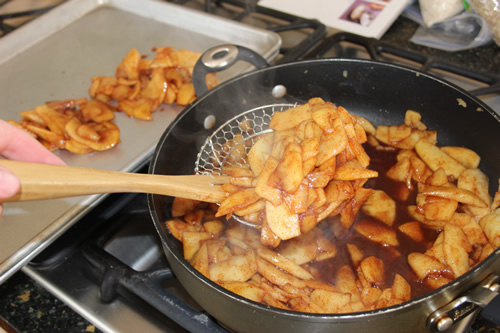 Spreading the apples out on the sheet prevents them from getting soggy. 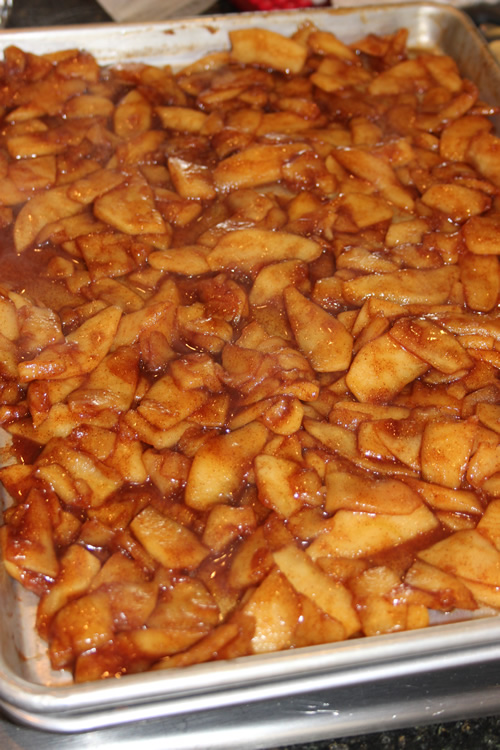 6. Pour the Southern Comfort into the skillet and simmer for at least 5 minutes. You want the alcohol to burn off. Test it by sniffing the mixture. If it mildly burns the inside of your nostrils then there is still alcohol in it. 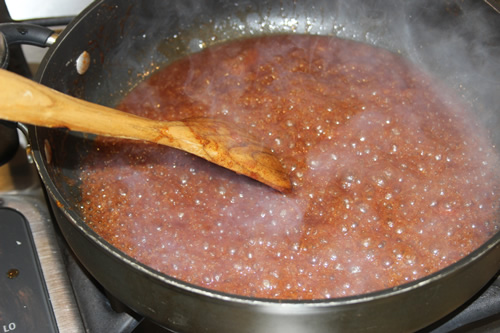 7. Add the cream and continue cooking for another 5-10 minutes until it thickens into a pourable caramel sauce. 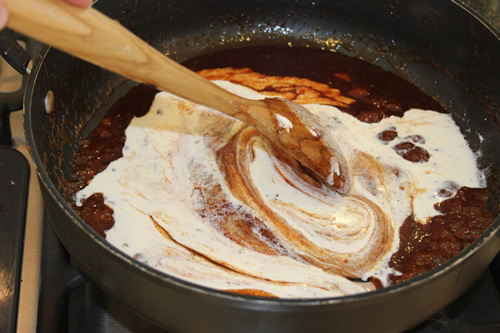 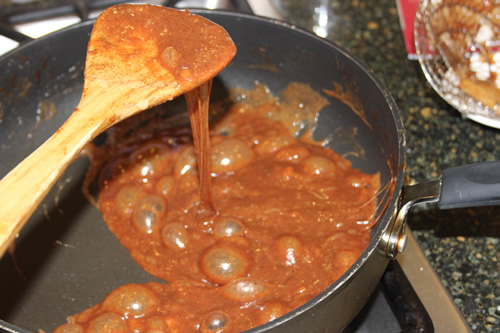 8. Return the apples to the skillet and coat with the caramel sauce. 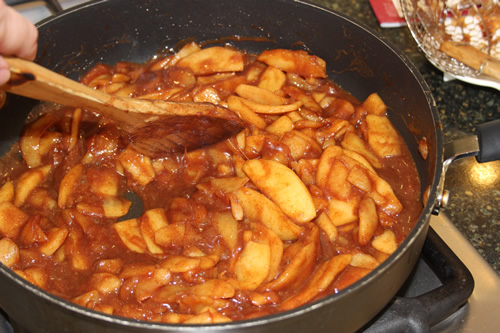 9. Pour the filling into the pie crust. 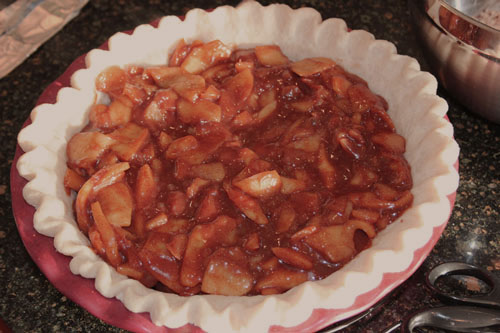 10. Sprinkle topping over the apples. You will also notice that I covered the edges of my crust with foil to prevent them from burning, since I had already partially baked my crust. I remove the foil during the last 10 minutes of baking to allow the edges to turn golden brown. If you are starting with an unbaked crust you don’t have to do this, although you will want to keep an eye on the pie as it bakes and, if the edges start to get too dark, add the foil near the end of the baking time. 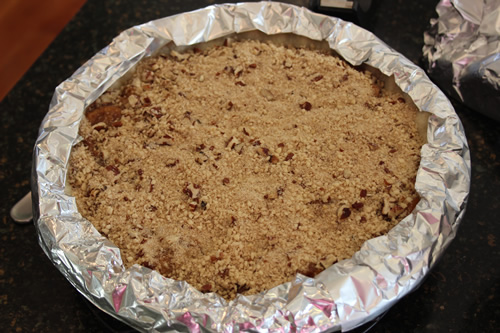 11. Bake for 50-60 minutes, until brown and bubbly. Serve warm or at room temperature. 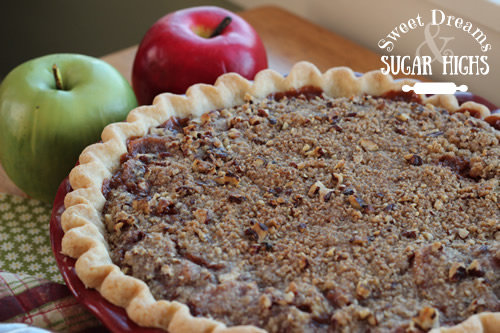 Here is the finished pie. 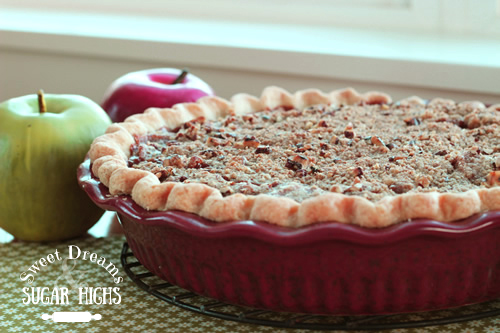 A little slice of heaven, if you ask me.

A word of caution though; once you get a taste for this pie you just might become a regular down at your local liquor store.