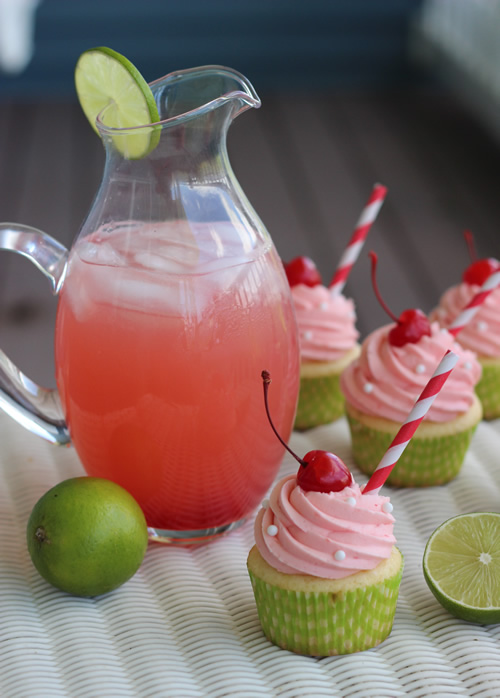 I can’t believe it is already the third week in August! I apologize to everyone for my silence in the virtual world these last couple of months. I have had a busy summer with little time for baking and even less time for blogging. Montana has short summers so when they arrive we tend to cram in a year’s worth of activities and company into a 10-12 week time frame. Although I have a dirty house and piles of bills sitting on my desk I decided I’d rather put together a new blog entry on one of the few cake projects I was able to do this summer; Cherry Limeade Cupcakes.

At the beginning of summer we had an invite to a friend’s house and I was asked to bring dessert. I wanted to come up with a new cupcake so I started thinking about different flavors that remind me of summer. Having spent my college years in Oklahoma, I remembered how I would often hit Sonic’s Happy Hour during the summer for a Cherry Limeade. We don’t have any Sonics where I live now so I really miss those drinks. That sounded like a perfect flavor combination for a cupcake so I started experimenting and ended up making several different batches of these cupcakes over the course of the summer. I began with using some recipes I found online but didn’t really like any of them. I ended up playing around with some of my favorite basic cake and icing recipes and adding flavors to them until I came up with a flavor combination I felt was worthy of being called Cherry Limeade. And here is the result; a limeade cupcake with lime curd filling and cherry swiss meringue buttercream. 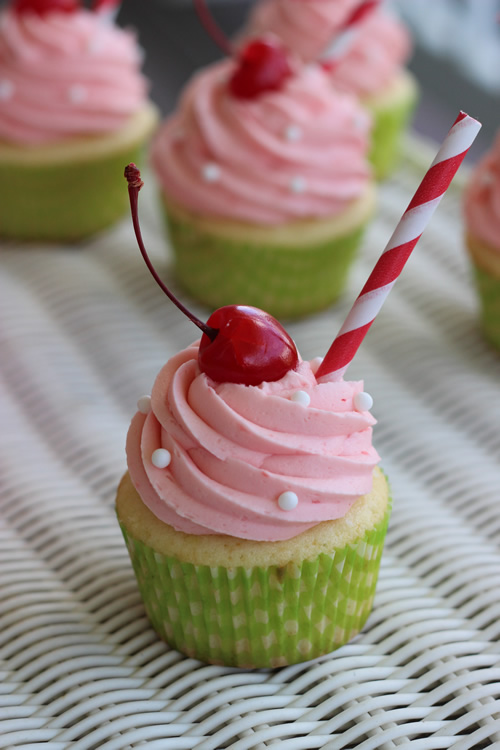 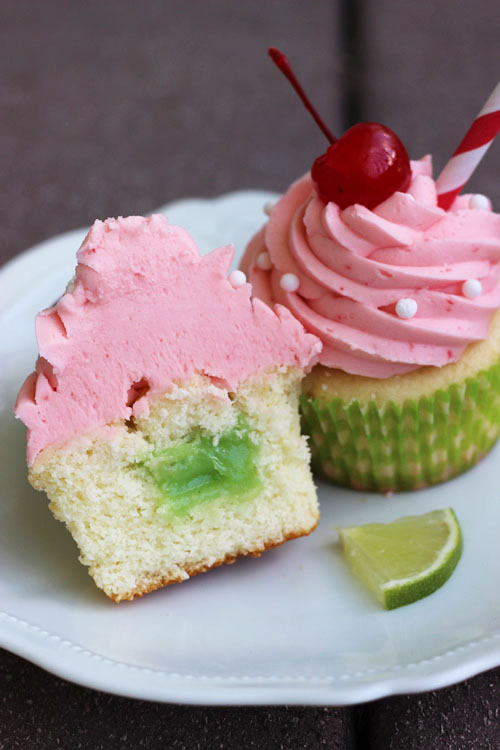 For the cake part of the recipe, I started with the Classic 1-2-3-4 Cake recipe from Susan G. Purdy’s Pie in the Sky

book, and altered it to create a limeade flavored cake. I used the basic recipe that was created to work at my altitude of 4700 ft. If you live in a high altitude area I highly recommend this book since you probably know what a nightmare baking at altitude can be.

For the lime curd, I just took a basic lemon curd recipe and replaced the lemons with limes. The natural coloring of the curd ends up being yellow because of the egg yolks and butter so I added a little food coloring to give it a lime green color.

The icing was the most difficult part to figure out. Most of the cherry icing recipes I found online didn’t have much of a cherry flavor to them. I stared with some traditional buttercream recipes and added maraschino cherries and maraschino syrup to them but they ended up being overly sweet. They tasted pretty good (if you like sweet icing) but the flavors of the lime cake and lime curd were so strong that the overly sweet icing made for a combination that was just too many flavors all competing against each other. My final solution was to use a swiss meringue buttercream recipe as the base. Swiss meringue buttercream is a mild flavored icing that is much less sweeter than standard buttercream icings. I used Martha Stewart’s recipe from her Cupcakes

book and added pureed maraschino cherries and cherry extract to give it the cherry flavor I was looking for. I think it turned out wonderful and the flavor was mild enough to let the cherry shine through without it competing against the tartness of the lime flavors. I hope you will love this combination as much as I did.

I’ve created a printable version of all three recipes that you can download here. I’ve also included a picture tutorial on making lime curd below, in case you have never made curd before.

Now that the cupcakes tasted great, I had to make sure they looked good too. I baked them in some cute lime green cupcake liners that I found in my stash. Then I used an Ateco #827 tip

to swirl on the mounds of icing. Please note that if you like to make large swirled mounds of icing on your cupcakes, like I do, you will probably want to double the icing recipe. I topped them with white sugar pearls

and an additional maraschino cherry, then cut red and white striped paper straws

in half and stuck them in the icing to make the cupcakes look like little drinks. Be sure to buy an additional jar of maraschino cherries with stems for the topping. You will use one jar for the icing but you won’t have any leftovers for the topping so get a second jar. Before you place the cherries on top, rinse them and let them dry thoroughly on a paper towel.

I think the adornments really helped add a summery cuteness to these little cakes. 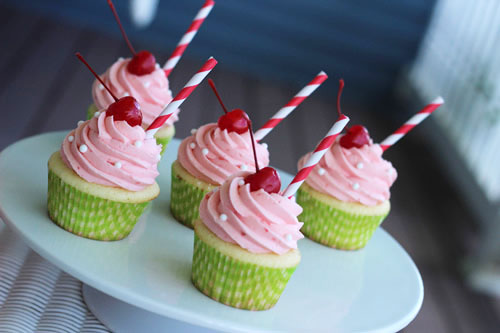 Now here is a picture tutorial on making the lime curd, as well as instructions for filling the cupcakes. Click here for a printable version of all three recipes.

(regular granulated will also work if you don’t have Baker’s Sugar)
Zest and juice from 3 limes
1/2 cup (1 stick) unsalted butter, room temperature and cut into 1/2″ chunks 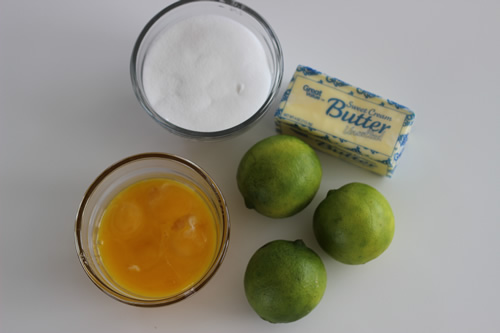 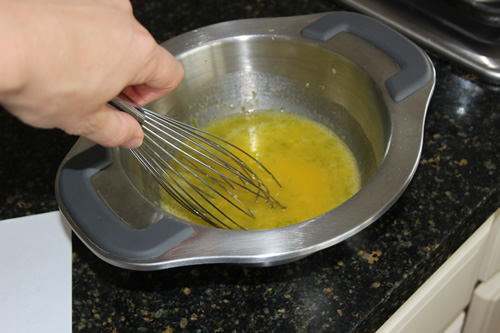 Place the top pan over the bottom pan and stir continuously with a wooden spoon until the mixture becomes thick and coats the back of the spoon, about 10 minutes. 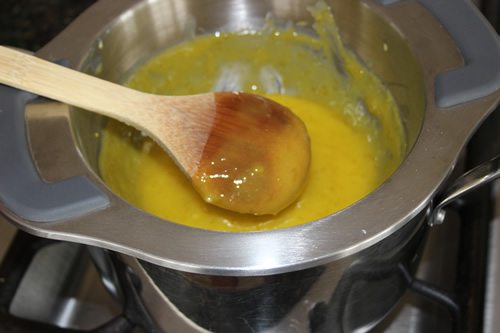 Remove from the heat and slowly add the butter, mixing until completely melted. You can also add the food coloring at this point. (I had already added it once I took this picture.) 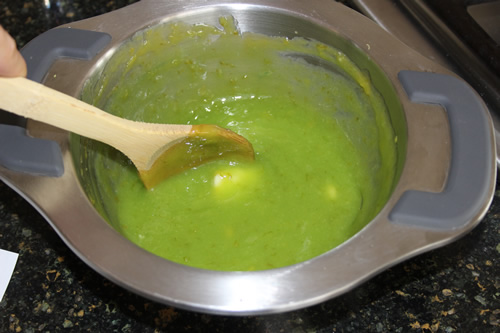 If you want to color the curd, start with a drop or two of blue food coloring to turn the natural yellow color green. You can then add a couple drops of green if you want a stronger green color. 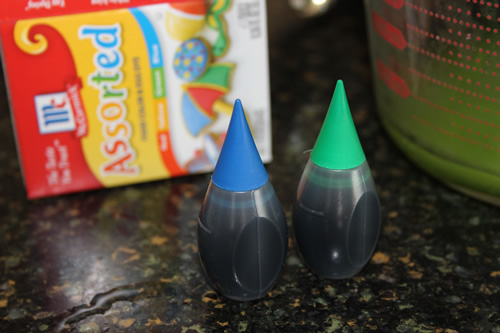 Use a spatula to press the mixture through a fine sieve. 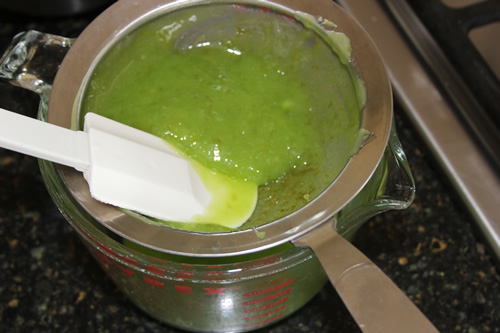 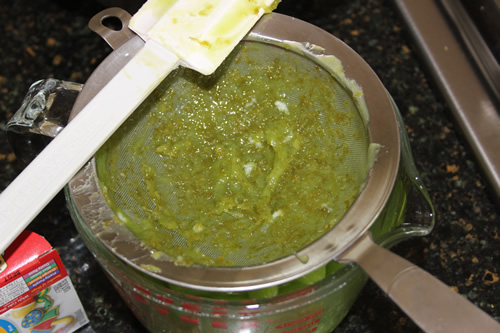 Pour curd into a bowl and place a piece of plastic wrap directly on the surface of the curd. Refrigerate at least 4 hours, until the curd has chilled and thickened. I usually let it set over night. 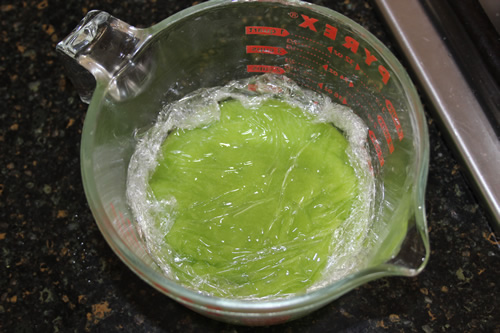 When you are ready to fill your cupcakes, use an apple corer

to remove a center plug of cake from the cupcake. Don’t press it down farther than 3/4 of the way though, so that you don’t accidentally remove cake all the way to the bottom. 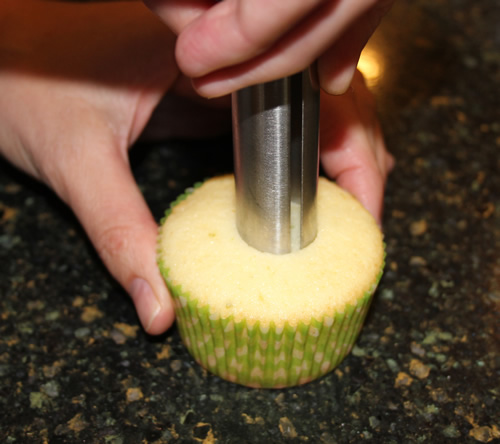 Fill a disposable decorating bag with the lime curd, cut off the end and fill the cupcakes. Leave a little bit of space towards the top of the cupcake. 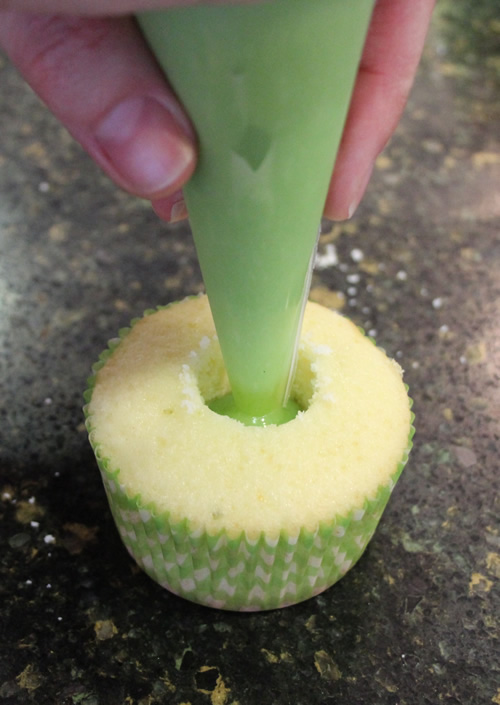 Slice a small piece from the top of the cake plug. 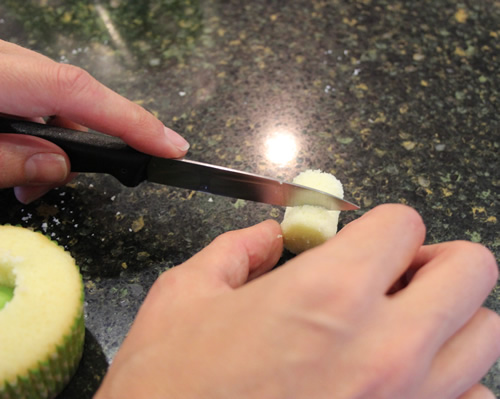 Return it to the cupcake, placing it on top of the curd. The cupcake is now ready for icing. 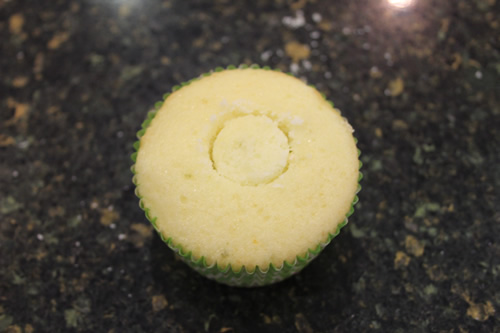 This is a cupcake that I think would even make Sonic proud. 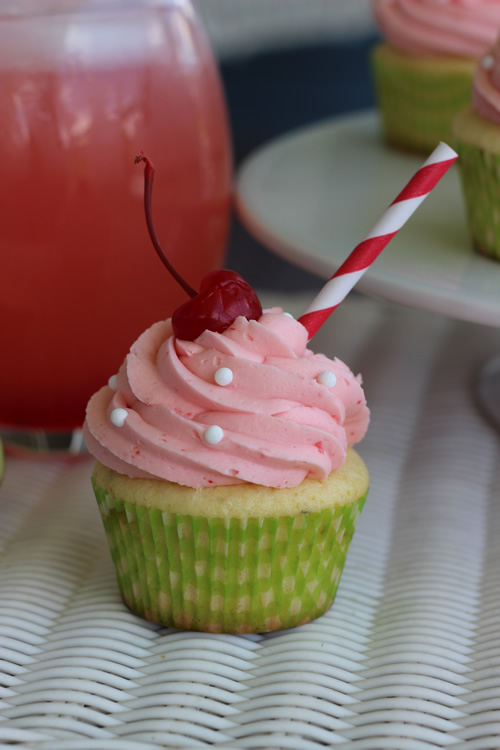 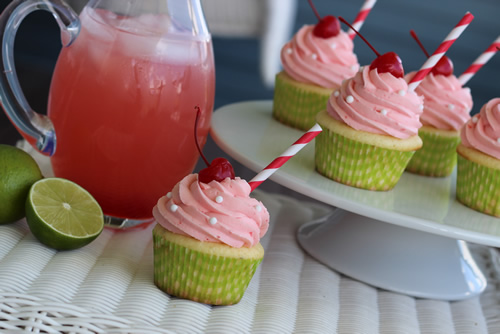