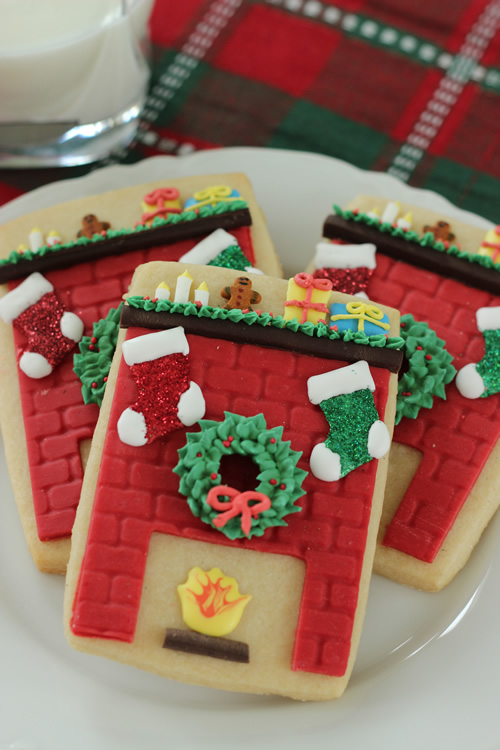 **UPDATE: Please note that I have recently learned that Disco Dust (which was used on the stockings) is now being considered non-toxic but not edible and should only be used on decorations that will be removed and not consumed. This blog post was written before my knowledge of this change.

Do you ever get something in your head but just never find the time to do it? That is how these Christmas fireplace cookies have been for me. I have been thinking about them for the last couple of years but just never had the time, or took the time, to get my idea onto a sugar cookie. This year was different. A major arctic cold snap came through at the beginning of December and I had to cancel a week’s worth of plans due to weather and road conditions. I had a cookie exchange coming up the next week so, although my house was in desperate need of cleaning, I decided to use my new found free time to create the fireplace cookies I had been wanting to make for the past couple of years.

I probably should have rethought doing them for a cookie exchange since the task of making four dozen of them for the exchange was a bit daunting, but I dived into the project anyway and was determined to finish. I completed them about a half an hour before I had to leave for the exchange. Not only did I finish the fireplace cookies, I also made four dozen each of peppermint macarons, eggnog macarons and rocky road squares. Call it an addiction, or just an attempt to avoid cleaning the house, but I had a fun week. 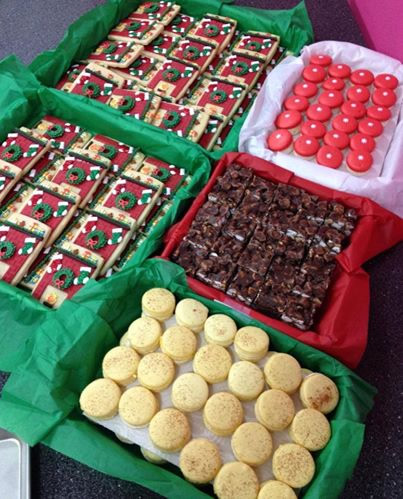 I thought I’d share with you some of the techniques I used to create the Christmas fireplace cookies. Towards the end I was in a mad rush to complete them so I didn’t get all the pictures I wanted but I’ll explain what I did to finish them.

Whenever I decorate cookies I always start with a sketch. I’m not the world’s greatest artist by any means, but I doodle my thoughts on paper then use colored pencils to color it in and make sure it is going to work. To make the sketch I trace around the cookie cutter I am going to use then draw the details inside of that area. 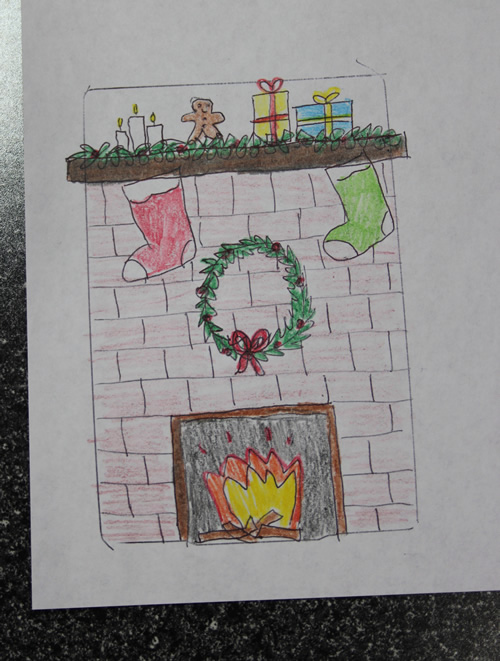 Because I had to make so many cookies, 48 to be exact, and they had a lot of different details, I needed to make the detail pieces separately or else the cookies would end up being stale by the time I got done decorating them all.

I started by making a batch of sugar cookies, using a rectangle cookie cutter and the No Fail Sugar Cookie Recipe. I love this recipe; it tastes so good and freezes really well. After the cookies were completely cooled I stacked them in baking dishes then covered them in plastic wrap and foil and stuck them in the freezer to stay fresh until I needed them.

A beautiful cookie usually requires some planning before ever picking up a bag of icing. I made pages of patterns for the various pieces I was going to make by finding pictures and shapes online then printing them out. 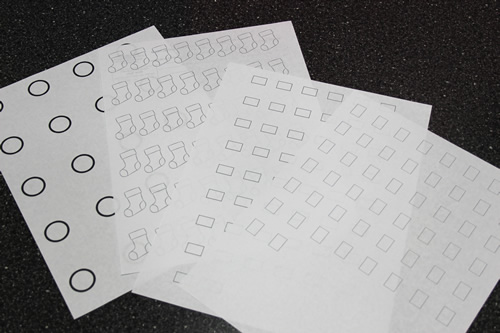 I taped the patterns onto cake boards

(you could also use cutting boards or the backs of baking sheets) and then taped a piece of waxed paper over them. This allowed me to pipe my pieces out of royal icing so I could let them dry and later attach them to my cookies.

For the wreaths I began by using a #8 round tip

and piping out a circle over my pattern. I then went back over it with a #349 leaf tip

and piped leaves to cover the entire circle. Before it dried I dropped some red nonpareils

. When I was done piping all the wreaths I set them out of the way and let them dry completely. It took me several days to work on all the pieces for the cookies so they had plenty of time to dry by the time I needed them. 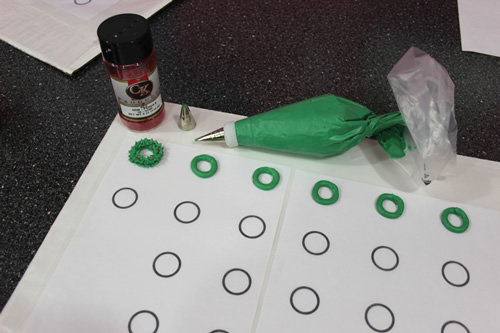 I wanted the stockings to be sparkly so I used red

Disco Dust to add some pizazz. I love the look of Disco Dust but it can be extremely messy to work with. I have found that you always want to pipe out the areas that will be covered in Disco Dust first and then pipe out your other areas later or else everything will end up covered in it. So I began by outlining the stockings with a #2 round tip

then filling them in with some thinned down icing. I then poured the Disco Dust on top of the wet icing. Don’t worry about using a lot of Disco Dust. You have to use a lot to cover everything well but most of it will end up going back into the jar once your pieces are dry. 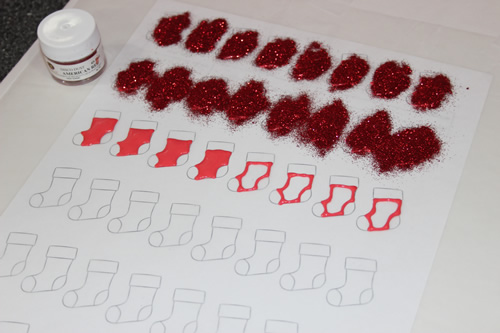 I allowed the pieces to dry completely then I dumped all the excess Disco Dust off onto a piece of waxed paper. A clean paint brush helps scrap off extra dust. Like I said before, this stuff can be really messy so it is almost impossible to get all of it off but I just do the best I can. 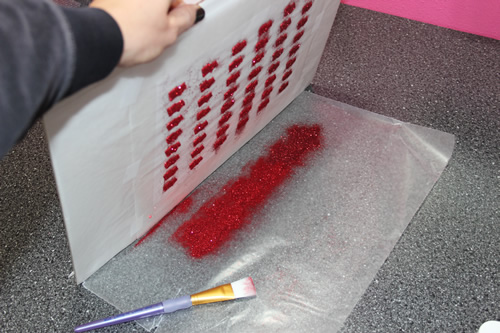 (one that paper craft people use) that I pour it all into and then empty it into my jar from there. 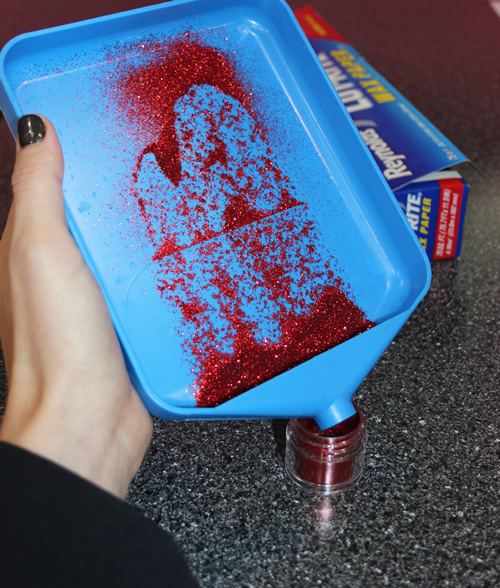 I didn’t get a picture of adding the white onto the stockings but after the Disco Dust was removed I went back over my pattern and outlined the white areas and filled them in with thinned down icing. I then put the board aside and allowed everything to dry completely.

I also didn’t get a picture of making the presents but they were just outlined and filled as well, then allowed to dry. I didn’t add the ribbons on the presents until they were in place on the cookies.

The fires were also made using a pattern. I found a picture on the internet then cropped out just the fire and printed multiple copies of it. I first outlined the yellow area, leaving the center open. While the yellow was still wet, I filled in the center with a reddish orange color then used a toothpick to drag the color into the yellow color. Again, I then let everything dry completely. 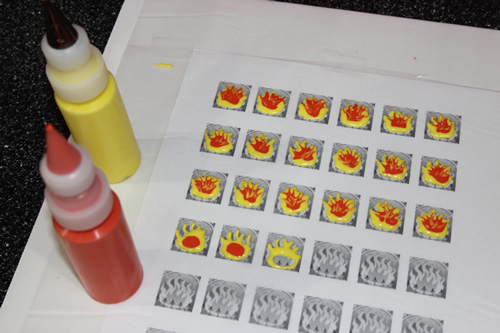 to add features to their bodies. 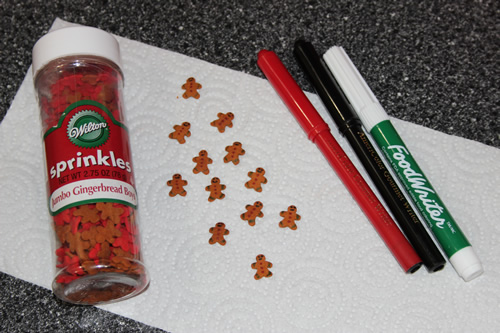 For the candles, I ran some white modeling chocolate through a round disc in a clay gun

then cut it into small, varying lengths. 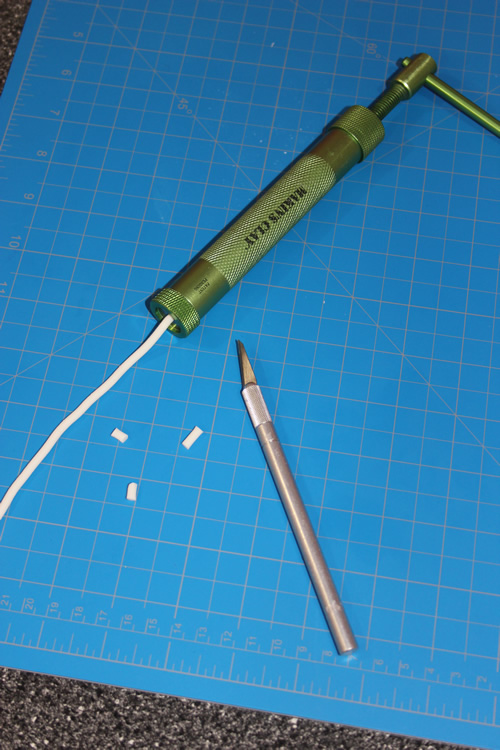 I used this same technique for the logs but I used brown colored modeling chocolate and a larger round disc in the clay gun. After cutting the logs the length I wanted I took a razor blade and split them down the middle so that they wouldn’t stick out as far and would have a flat surface to attach to the cookie. 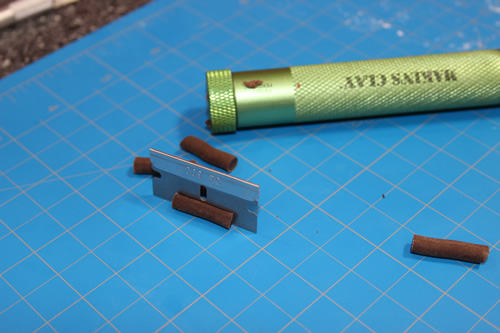 I used this same brown modeling chocolate for the mantles. I didn’t get a picture of it but I just rolled out the chocolate to the thickness I wanted then cut it in strips to use as mantle tops.

I was even able to make the bricks ahead of time. I made a batch of modeling chocolate, using red candy melts

, then rolled it out thin. I laid a brick texture sheet

on top of the chocolate and used a fondant smoother

to evenly apply pressure and press it into the chocolate to leave indentions. 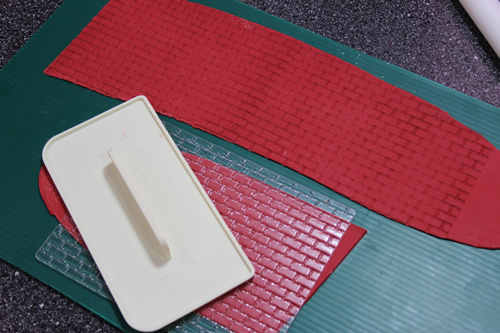 I then took my original cookie cutter and cut out rectangle pieces of the bricks. I trimmed them to the length I wanted, with a long razor blade, then used a square cutter

to cut out the area for the fire. I placed them in the freezer for a few minutes to firm up then slid a spatula

under them and lifted them up. Since I made them ahead of time, I layered the finished pieces in single layers between pieces of waxed paper in a baking dish then covered the whole thing with plastic wrap. They can be stored at room temperature. 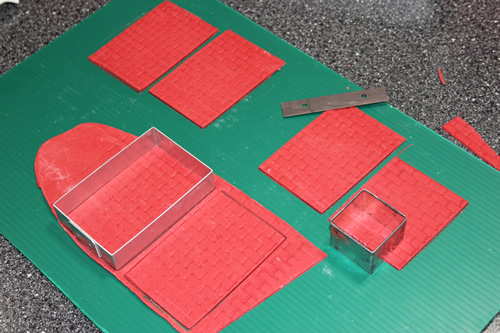 At this point the clock was ticking down so I stopped taking pictures. To attach everything to the cookies I mostly used piping gel

. With a clean paint brush I spread the piping gel on the back of pieces then adhered them to the cookies. All the royal icing pieces were easily lifted off their waxed papers by sliding a spatula

under them. They were then attached with piping gel too, except for the wreaths, which were heavier, so I used some royal icing on their backs to attach them.

. The greenery was added to the mantle with a #14 star tip

to give the look of berries.

In my original design I was going to fill the fireplace area in with black icing but I changed my mind and decided to leave it off because I thought it looked fine without and I was running out of time.

Here is the final cookie. The only other feature I wish I would have added, but ran out of time for, was some brown trim around the fire area. 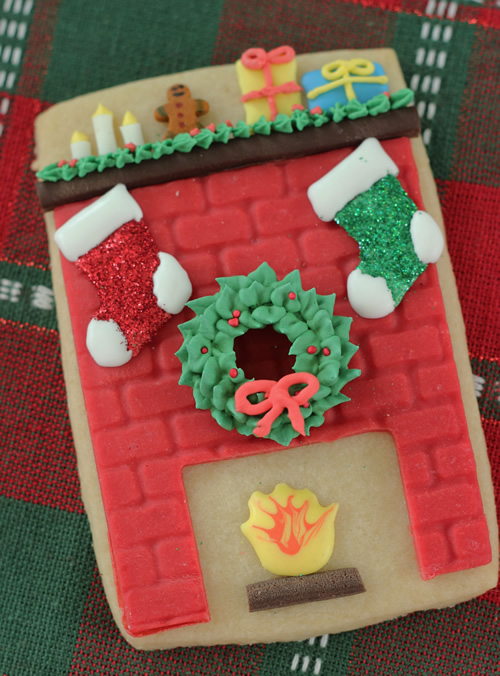 Yes, it was a lot of work for a cookie, but I loved the outcome; and any crafter knows that there is as much enjoyment in the process of creating as there is in finishing. Plus, I won a prize for having the “Most Beautiful Cookie” at the cookie exchange!

I hope your having as much fun with your own cookie decorating projects as I had with mine.

Until next time, Merry Christmas and Sweet Dreams.