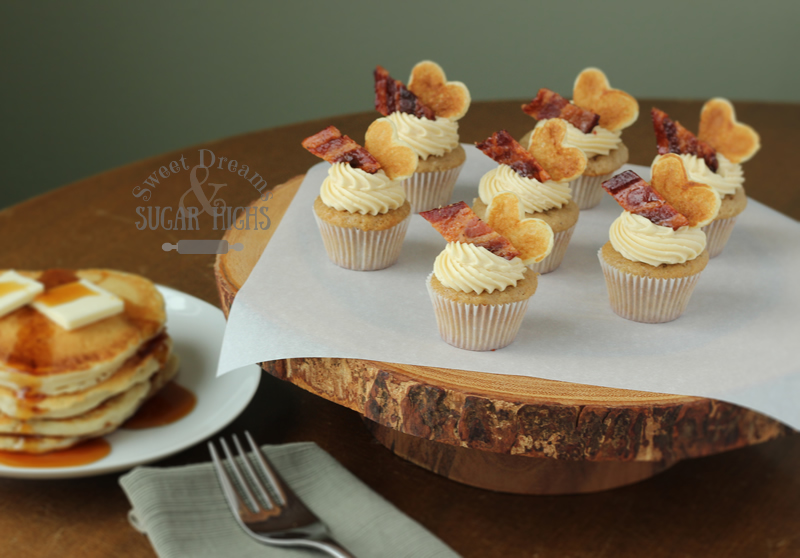 Tuesday mornings are one of the best times of the week for me because I attend a morning Bible study. I love studying God’s Word with others but the other reason I love this study is that breakfast is always provided. Every week groups of ladies take turns bringing breakfast to share with everyone. We have had some of the most amazing egg bakes (who new there were so many different types out there!), hash brown casserolles and other yummies that I never make for myself.

Last week was my group’s turn to provide the meal. I contemplated all the traditional breakfast foods I could bring and then decided to stick with one of the things I know best, cupcakes. I was a little concerned how people would feel about having cupcakes for breakfast but then I remembered that donuts and cinnamon rolls aren’t really all that different. So I decided to create a Breakfast Cupcake. If I used breakfast flavors and added some bacon and pancakes to it I was pretty sure I could get away with it. I’m happy to say it went over really well. In fact, I brought about 60 mini cupcakes and came home with an empty tray and lots of compliments. 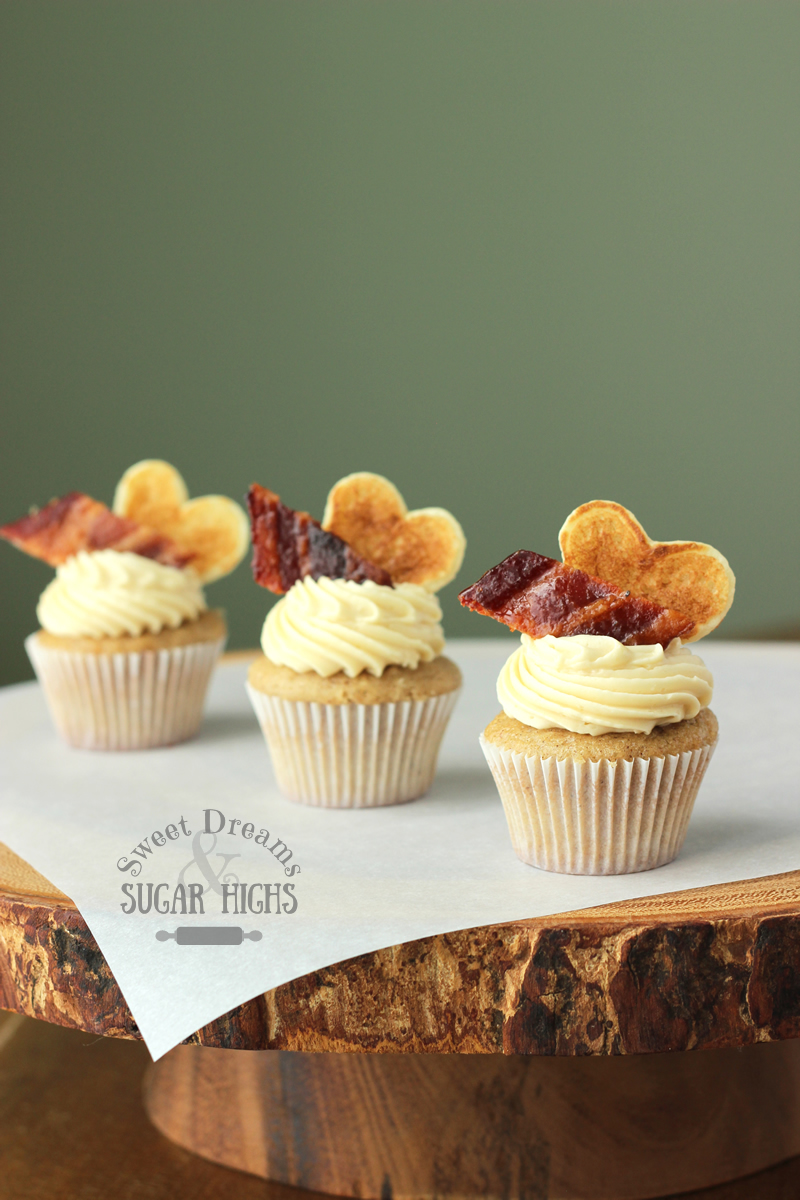 So I thought I’d share with you my Breakfast Cupcake creation. (Now I’m not suggesting you feed these to your kids. You should probably still give them their oatmeal and eggs and then you can bring the cupcakes out for yourself after they have left for school.) These cupcakes are made with a buttermilk spice cake, topped with maple buttercream icing and adorned with candied bacon and mini pancakes. Spices and maple are flavors that you find in lots of breakfast foods, and bacon and pancakes are, of course, breakfast foods. So I am giving you total permission to call these Breakfast Cupcakes. Okay, enough justifying my dietary choices and let’s get on with how to make them.

I made mine mini sized since I was taking them to a large potluck type meal but you could always make them full sized cupcakes as well. Look how cute they are as a mini though. 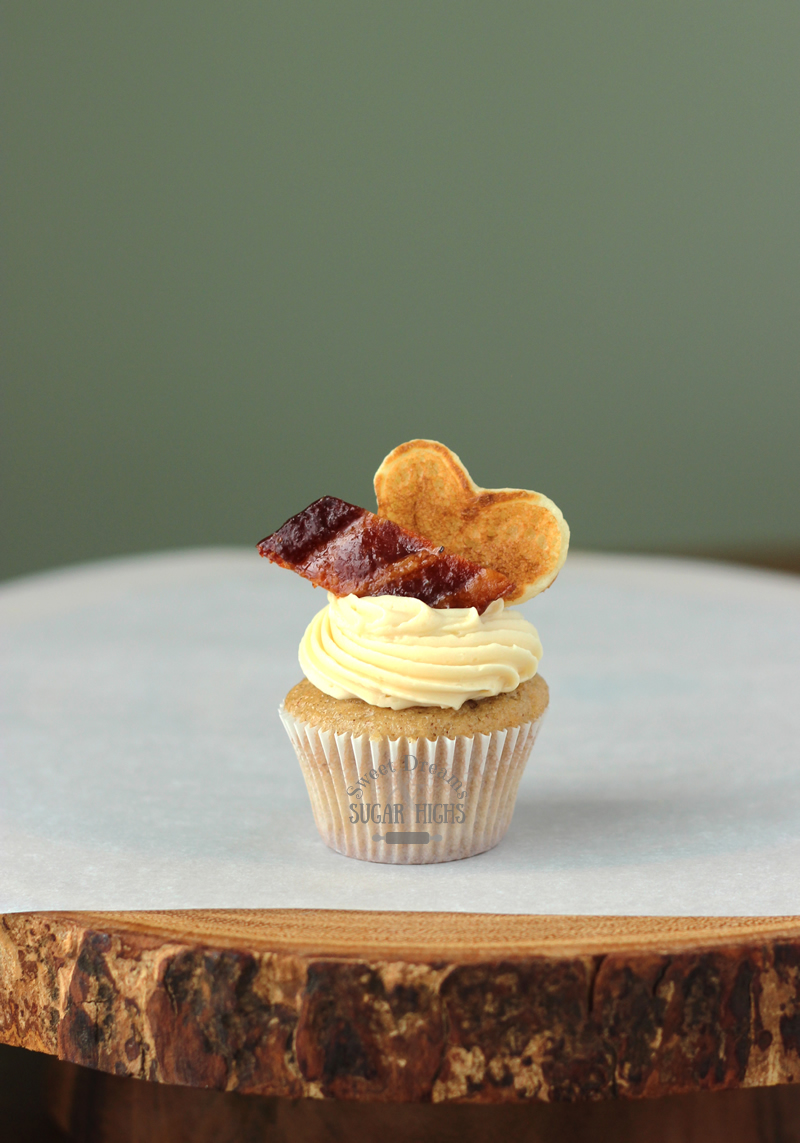 Start by making your adornments first. I didn’t include a pancake recipe in my recipe card since most people have their own favorite pancake recipes but if you want to use the same Buttermilk Pancake recipe I did you can find it here. If you decide to make yours heart shaped like I did, you will want to use a thicker batter that is more likely to hold its shape. You could also just do them as little rounds. In order to make the hearts I put the batter in a decorating bag fitted with a #10 tip. (Any round tip around that size will work.) I piped the left side first, applying pressure as I made the top round part of the heart and then letting off my pressure and swiping the tip down to the point. I then repeated that motion on the right side to create the heart. Unfortunately I didn’t get photos of this motion since I didn’t have someone else to take the pictures while I did it. The trickiest part is trying to keep them small. I used a small off-set spatula to turn them because they were too small for my usual pancake flipper. 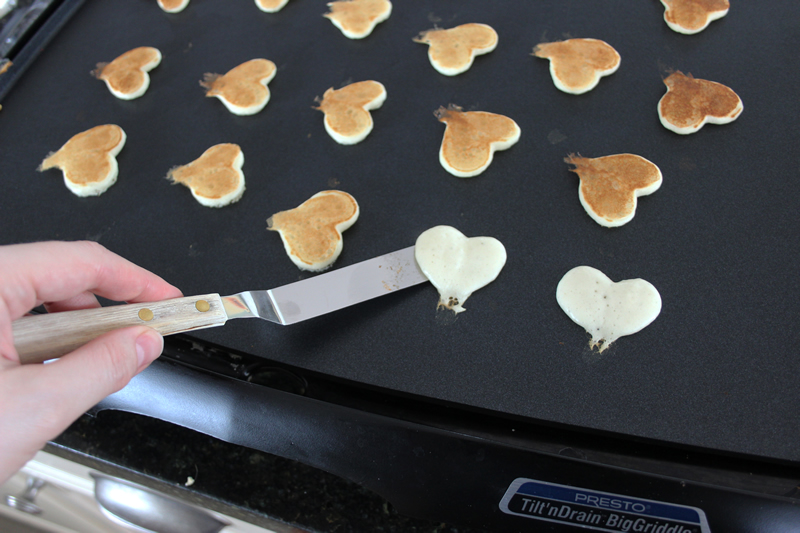 As you can see, the batter left a messy point on the bottoms of them. It really isn’t that big of deal since you will just be sticking them in the icing but the OCD in me couldn’t allow them to stay that way. I ended up using my kitchen shears to trim them to a point. 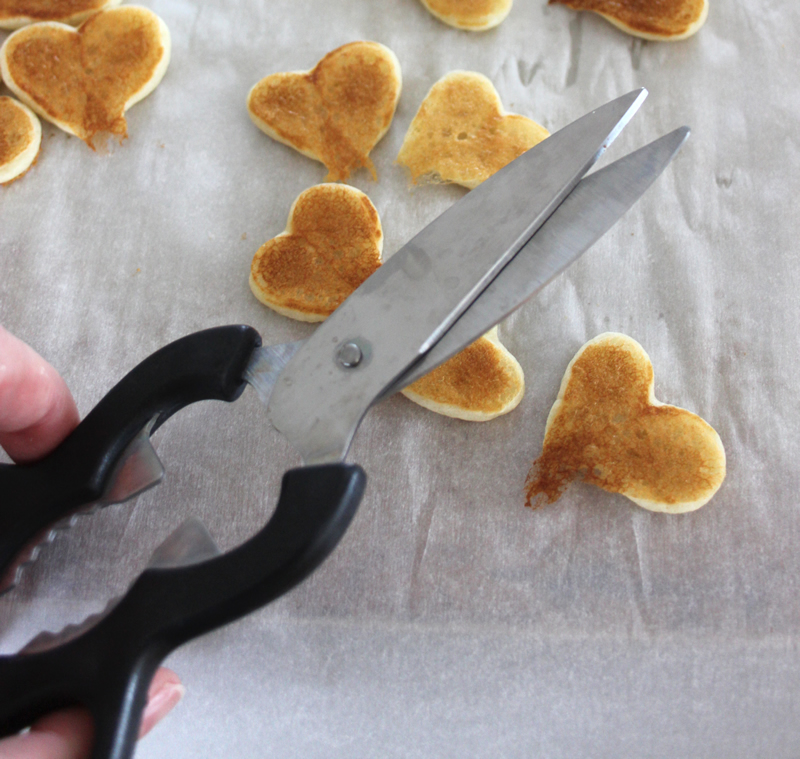 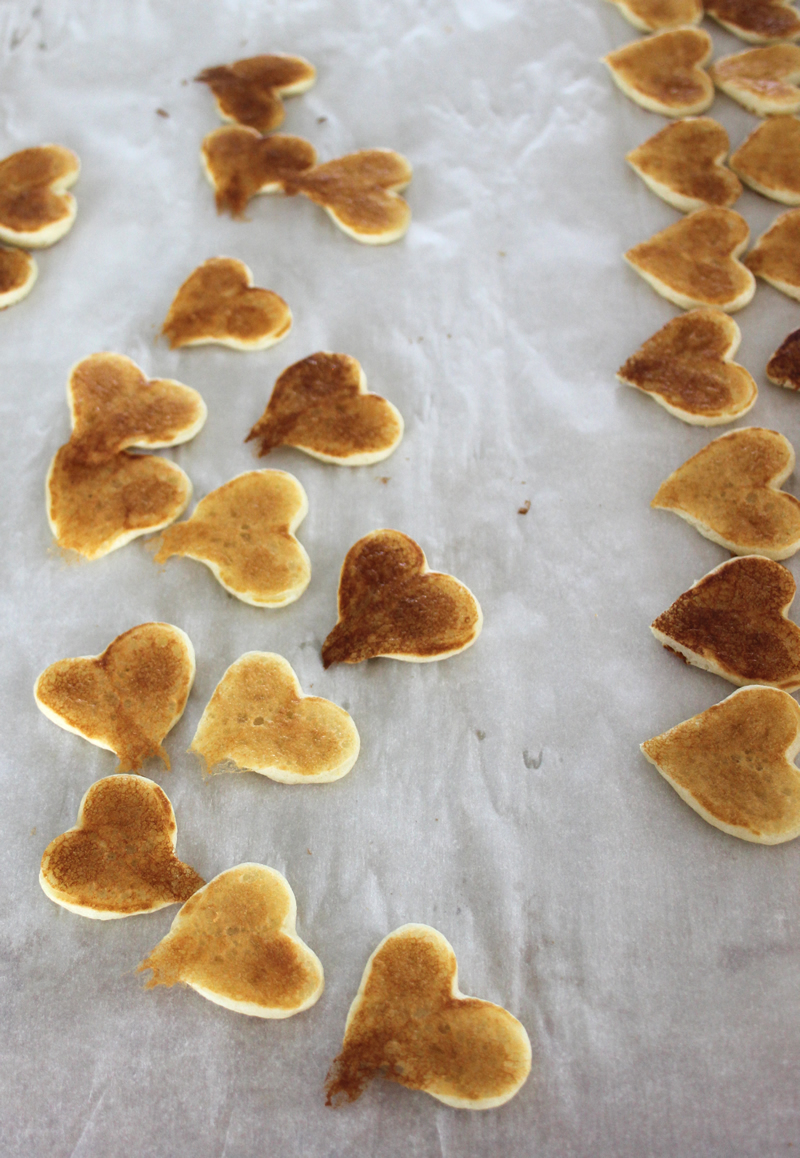 Set the pancakes aside and now lets get on to the candied bacon. By the way, if you are still wondering about the existence of God, you will have complete belief in Him after you have tasted candied bacon! I mean just look at this tray of amazing sweet and salty pork goodness!

Please note that this photo was taken after the bacon had cooled and I placed it in a new pan with clean parchment paper. When it first comes out of the oven the parchment is full of melted sugar and fat so it is a mess. I didn’t want you to think there was something wrong with your bacon if it didn’t come out of the oven all neat and tidy like in this photo. You will find the recipe below. When the bacon is completely cool, use kitchen shears to cut it in strips. I cut mine on the diagonal to give them an angled look on the cupcakes. 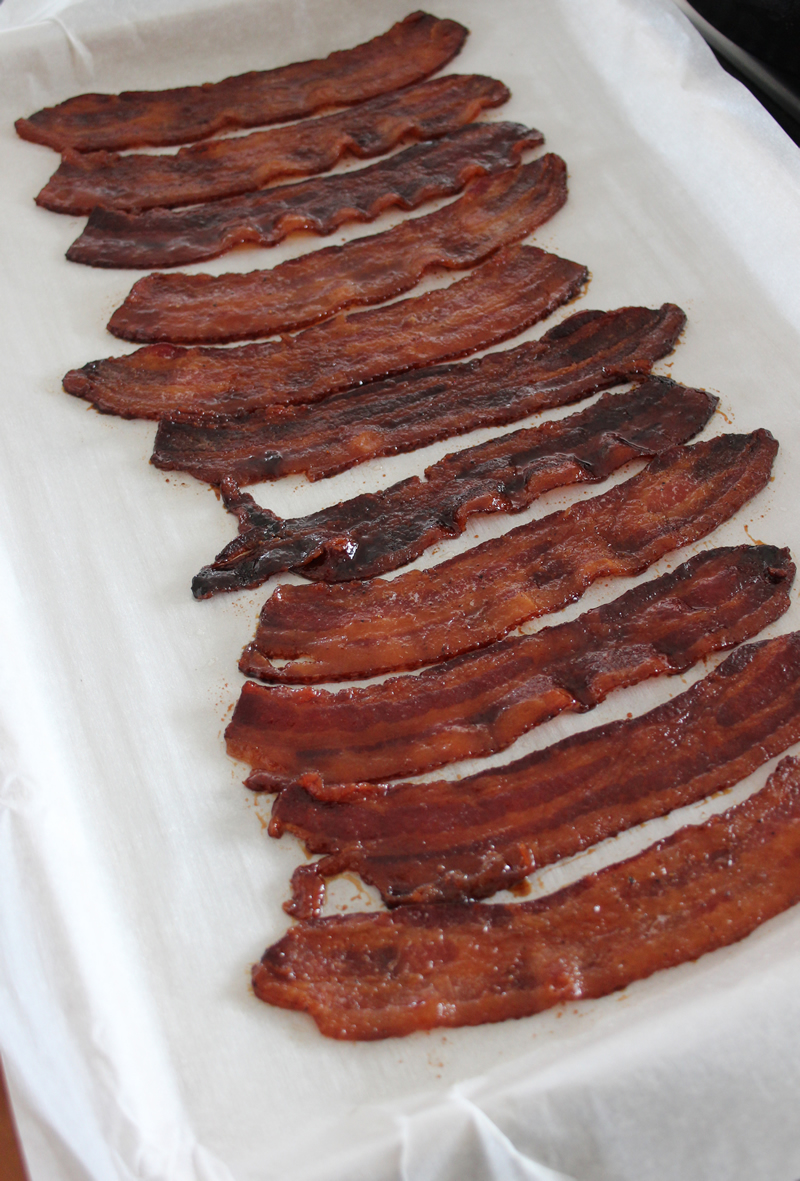 Now that all the adornments are prepared and set aside, it’s time to make the Buttermilk Spice cake. I love this cake. It is light, moist, and has a wonderful balance of warm spices. One of the most difficult things for me about baking cupcakes is knowing how much batter to place in the liner. Some recipes only need to be filled half way, others 2/3 and some 3/4 full. The best way to know for sure is to make a couple of sacrificial test cupcakes. Fill one half full and the other 2/3 or 3/4 full and bake then see which is best. Unfortunately I never do this and I tend to overfill my cupcakes. So I filled all of my first batch of liners a little over 2/3 full and it was definitely too much. They all rose too much then spread out on the sides. It doesn’t make them inedible or anything but they sure aren’t as pretty as they should be because the tops flatten out and the spread batter is always uneven and slightly burned from resting on the pan.

Once I saw what happened to the first batch I made sure to fill my second batch only half way. Look at what a big difference it made. The cupcake on the left is 1/2 full and the one on the right was 3/4 full.

A couple of notes on the recipe; first, I listed that it makes 60 mini cupcakes. To be honest, I think I got closer to 66 minis, even with overfilling over half of them, so you will probably get more than 60 but I put 60 just to be safe. Plus that allows you room to remove the ugly ones from your batch.

Second, I live at an altitude of 4500 ft. That isn’t extremely high but it is high enough that I usually have to make adjustments to my baking. The recipe is written in the original, sea level, format but I included notes at the end of it for the adjustments I made for my altitude. If you live at a higher altitude than me you will probably even have to make some more adjustments. 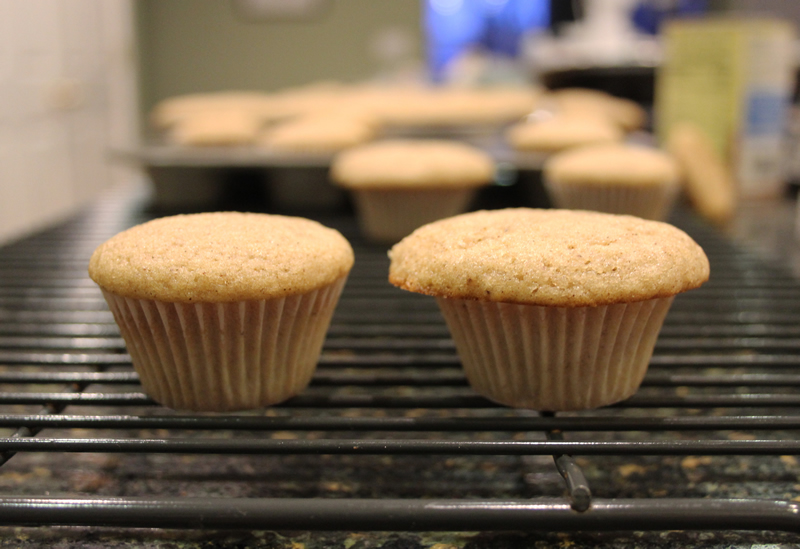 Before we get to the Maple Buttercream, lets talk about maple syrups for a minute. There are different grades of maple syrups and, since maple syrup can have a pretty mild flavor, it is best to use the strongest flavored syrup for baking. Ideally you want to use a Grade B syrup. Except, they recently (like 2 or 3 years ago) changed the names of the grades and Grade B syrups are now called Grade A Dark Color Robust Taste. Frankly, I think it was much easier to just say Grade B but maybe people thought Grade B meant it was lesser quality. So some bottles of syrup, like the kind I use, will have both references listed on their labels. If yours doesn’t say Grade B anywhere then just look for Grade A Dark Color Robust Taste.

What is the difference in this grade as opposed to the others, you ask? Well, it has to do with when they are harvested. The earlier in the season the maple is harvested, the lighter and milder the flavor. Most of the syrups in my grocery store are from the earliest tap and are called Grade A Golden Color and Delicate Taste. The Grade A Dark Color and Robust Taste (also formerly called Grade B) is harvested a little later in the season and is darker in color and has a stronger flavor. By using this grade in baking you are more likely to get the maple flavor to come through than you are with the prior. If you can only get your hands on the prior then that is fine too. If you don’t feel like the flavor is coming through strong enough with it you may also want to add a splash of maple extract. 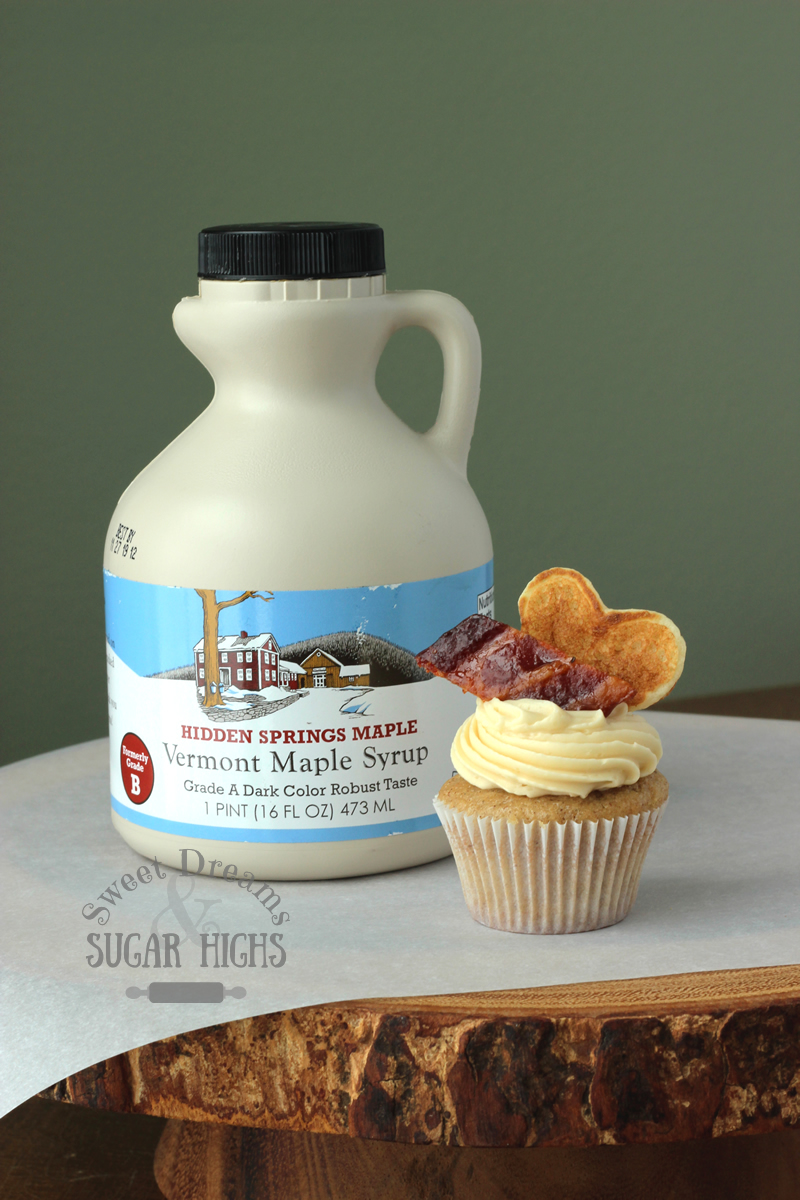 Unlike a traditional American Buttercream, this icing is made by first making a boiling sugar syrup and then incorporating that into egg yolks. It makes for a silky, buttery icing which greatly reminds me of the flavors of butter and maple syrup on my morning pancakes. (See, once again, these are totally fine for breakfast.) Be careful when making this though, as you are working with boiling sugar. When you add it to your mixer be sure you are on the lowest speed setting so that you don’t get burns from boiling sugar flying in your face.

Once you’ve made your buttercream, use it right away to ice your cupcakes. If you have to make it ahead of time, store it in the refrigerator and allow it to come to room temperature when you are ready to use it. Rewhip it again just before using. The butter in the buttercream causes the icing to get really hard while in the refrigerator so you always want to allow your cupcakes to return to room temperature before eating for the best flavor and mouth feel.

I put my icing in a decorating bag and used a tip #4B to pipe the swirls of icing on top of my cupcakes.

Then you just adorn each with a pancake and a piece of bacon and you are all ready for a healthy…um, I mean… yummy breakfast! 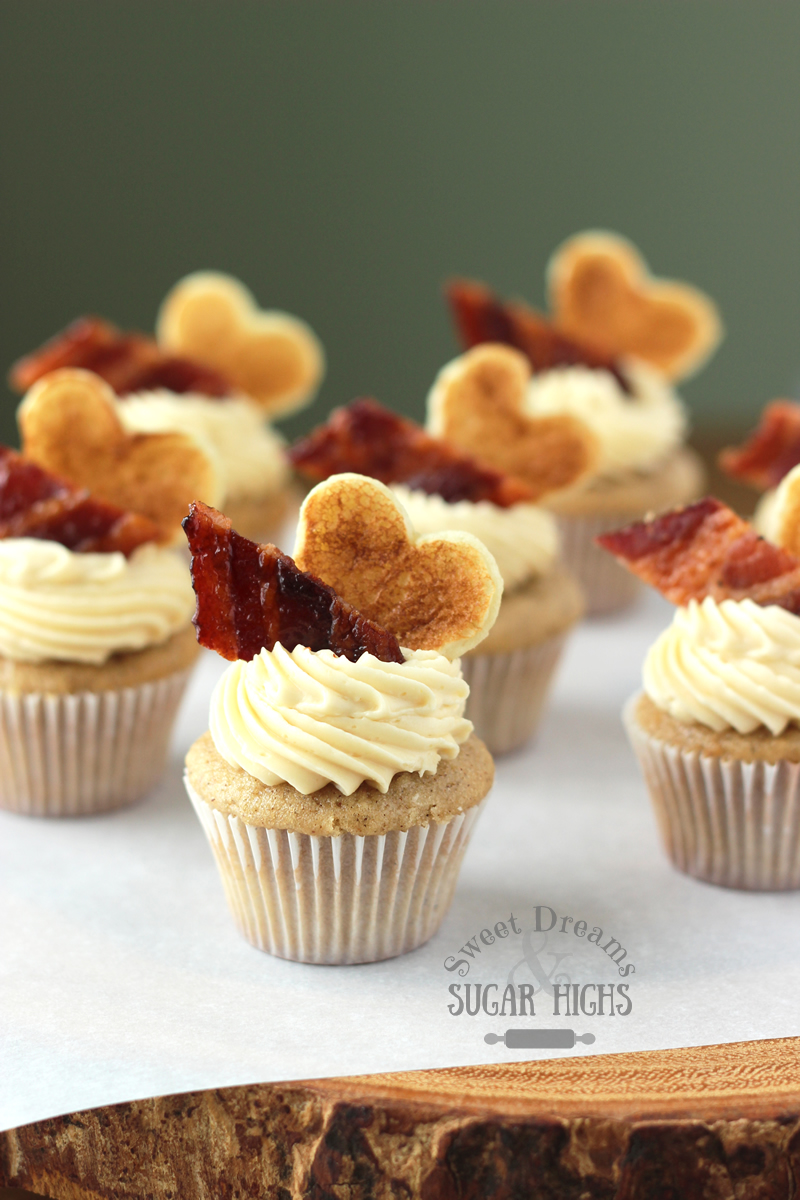 Mini cupcakes made with a buttermilk spice cake, topped with maple buttercream icing and adorned with a piece of candied bacon and a tiny buttermilk pancake.

*The following are the high-altitude adjustments I had to make to these recipes. My altitude is 4500 ft so you may have to make more adjustments if you live higher than that.

Spice Cake: Add 2 Tbsp of flour and 2 Tbsp of buttermilk. Decrease both baking powder and baking soda to 3/4 tsp. and remove 1 Tbsp of granulated sugar and 3/4 Tbsp brown sugar. Bake at 365°F. 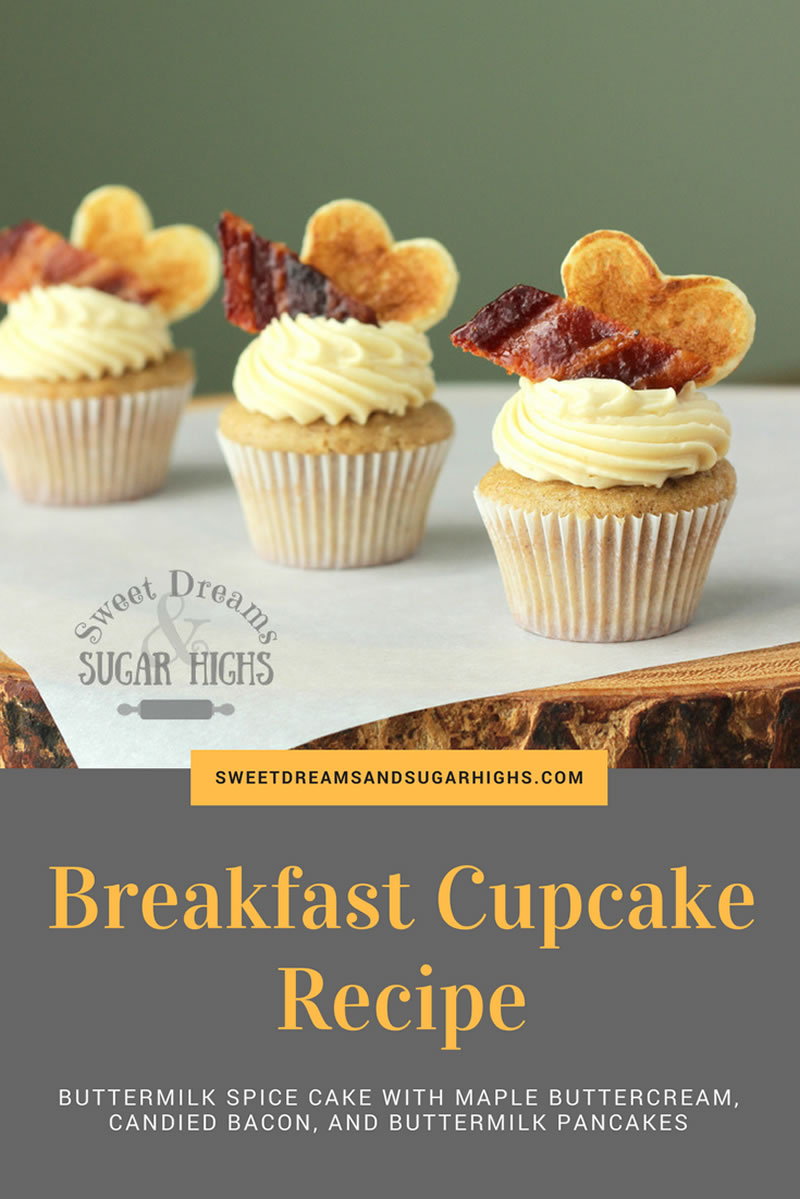