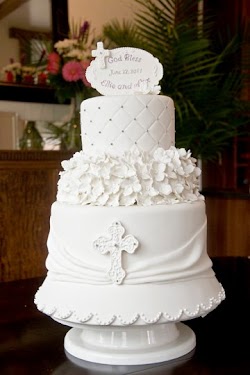 A couple of weeks ago my niece, Ellie (yes, the same one whom I mentioned in my last blog) and her baby brother, Alex, were baptized. It was a very special day for me. Most importantly, I became my nephew’s Godmother that day but, on a side note, I also made the cake for the reception afterwards.

I don’t often do elegant cakes since my style tends to be more of party cakes or sculpted cakes but I thought that a baptism was a little more serious and needed something beautiful, not just cutesy. I thought I would share a few pictures of the cake and give a little information on how I made it. I didn’t take pictures while I was making it since I was on a time crunch so I will do the best I can to explain.

When trying to decide on a design, I really felt that the cake needed to be all white since white symbolizes purity and baptism is a representation of purity that comes through Christ. An all white cake can get boring pretty quickly, though, so I knew I needed to add a lot of texture to it to keep it from looking too plain. 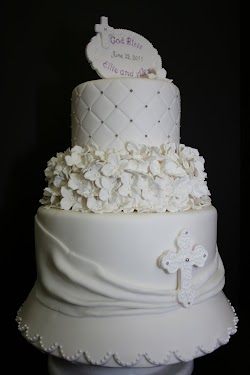 My first step was to make the cross and plaque since they would need several days to dry. I found a picture of a cross charm online and printed it out then enlarged it to the size I wanted for the cake. This is what I used to make a pattern I could lay on rolled out gum paste

and cut around. Once it was dry I used royal icing, in a decorating bag fitted with a #2 tip, and freehand piped the design. Since I wanted to add just a tad of bling to the cake, I placed a few dragées 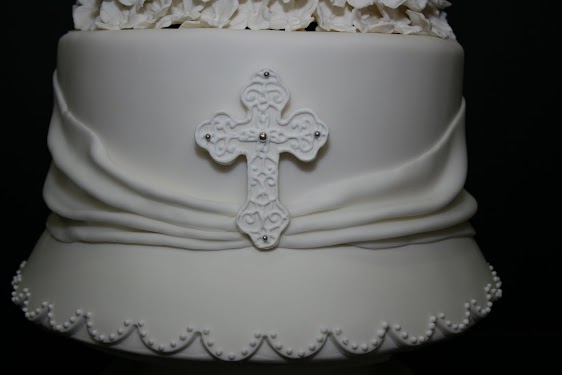 For the plaque, I also looked online and found a pattern I liked. I cut that out of gum paste too and let dry for several days. In the mean time I used the computer to find a pretty font and laid out the wording how I wanted it to look on the plaque. I printed that off then put it in a projector and projected it onto the plaque where I could copy it on there with royal icing and a #1 tip. If you don’t have a projector, which most people don’t, you can also do this by scratching pencil all over the back of your printed image and then lay it on the gum paste and trace over the words. This leaves a light pencil marking of the wording that you can then pipe over. Of course, if you don’t have horrible writing like I do, then you can just freehand it too.

that had been thinned down with vodka. You don’t want to use water or it will dissolve your royal icing. The high alcohol content in the vodka allows it to evaporate before doing too much damage to your icing.

For the silver wording I used some silver luster dust

, also thinned with vodka, and painted it on.

To finish it off, I used a mini cookie cutter

and cut out the small cross from gum paste and piped on it with royal icing then attached it to the plaque with more royal icing. The whole plaque was attached to a dowel rod with melted chocolate so that I could stick it into the top of the cake once the rest of the decorating was done. 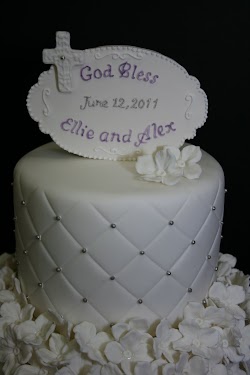 I wanted to add a lot of texture by making a layer covered in flowers so I made about 250 fondant flowers. I normally do flowers in gum paste and roll them out very thin but, for this cake, I wanted them made out of fondant so they would be a little more tasty for the kids. I rolled my fondant thin, though not nearly as thin as I would had they been gum paste. I then used a hydrangea cutter and veiner set to cut out and vein all my flowers. I normally make flowers on wires and then hang them upside down to dry but these weren’t on wires so I had to figure out a creative way to get them dry since they would fall flat if left upright. I ended up sticking a bunch of toothpicks in a sheet of styrofoam and carefully placed them upside down on the toothpicks. It worked perfectly. Once they were dry I added a touch of piping gel

. When it came time to attach them to the cake, I covered the single layer tier with fondant and then attached the flowers individually with melted white chocolate. 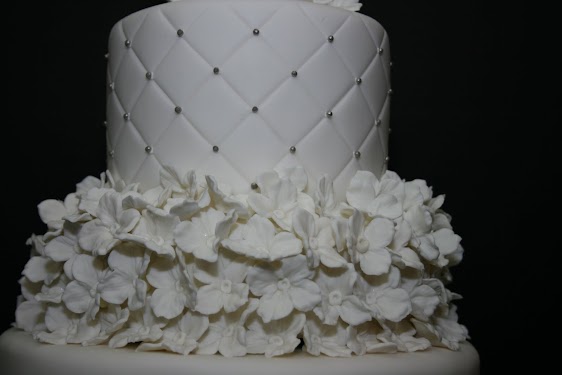 To imprint the diamond look on the cake above the flower cake I used a diamond impression mat and pressed it into the freshly covered fondant cake. I then piped small dots of royal icing at all the intersections and attached dragées 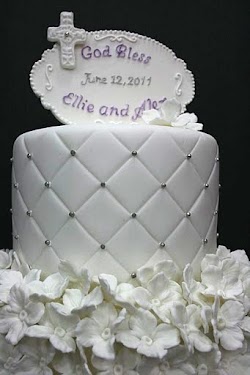 The angled base of the cake was made out of styrofoam. I took a 12 inch round piece of styrofoam and traced around a 10 inch cake board on the top of it. (The cake that sat on it was a 10 inch round.) I used my scroll saw and played around with the angles on it until I got it to cut from the traced line on the top to the edge of the bottom of the styrofoam. I love scroll saws, they make cutting styrofoam so easy and neat. I then painted a layer of piping gel on the styrofoam and covered it with fondant. To make the scalloped look, I rolled out another strip of fondant the length and width of the base and used afrill cutter to cut the scalloped edges. I attached this strip to the base then piped small dots around the edges.

The largest cake sat on the base. It was covered in fondant and then I cut another strip of thin fondant the length and width of the cake. I gathered the ends of it to give it a fabric look and carefully attached it to the fondant covered cake with some piping gel. This was the most difficult part of the whole project for me. Once I had it in place I used some melted white chocolate to attach the cross.

For someone who doesn’t do elegant cakes very often I was thrilled with the final results. 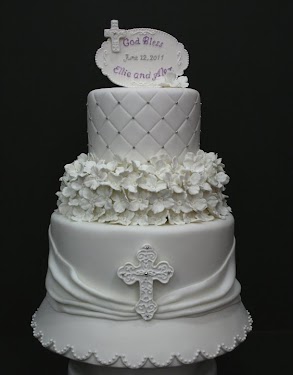 I know Ellie and Alex’s baptism was about something much more important than cake but I hope that my cake made it all the more special for them.

Until next time, God bless and Sweet Dreams!