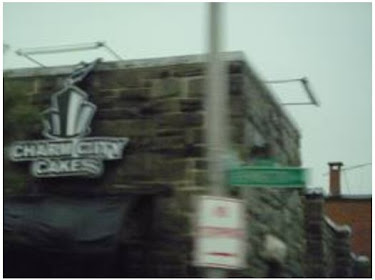 As you may already know, back in December, I won a charity auction to visit Charm City Cakes with my family to make a cake with Duff Goldman and Geof Manthorne of Food Network’s Ace of Cakes. Well, this is the week it all happens! More specifically, Thursday of this week is when it all happens. That also happens to be my birthday. Can anyone say “Best Birthday Ever?!”

Anyway, we arrived here in Baltimore a few days early so we could do some sightseeing and also visit Days End Farm Horse Rescue, which is the charity that the auction proceeds benefit. We will visit them tomorrow.

After some sightseeing around town today we decided to drive to Charm City Cakes so we would know where it was located and get a quick glimpse of the famous storefront. We found Remington Avenue and quickly spotted the unique stone building where all the cake magic is performed. I wanted to get a picture, as proof that I am here, but it was pouring rain so we decided just to get a drive-by photo. We passed it on the driver’s side so I asked my husband to turn around and drive by again so that this time we could pass it on my side. When we did that, though, a large tree blocked my shot of the front so I couldn’t get the photo. We circled around the building again and decided that this time we would come by it on the driver’s side once more and have my daughter take the picture from her seat. (At this point we figured we were beginning to look kinda creepy since we kept driving slowly around the building in our suburban with tinted windows.)

I had my daughter roll her window down to keep the raindrops from messing up the shot. We slowly drove up to the front of the building when suddenly Geof walked out. We all got excited and yelled “There’s Geof” at which he looked over at us. We then yelled at my daughter to put the camera down and roll up the window since we didn’t want to be so obvious. We quickly zoomed off and she snapped one fast picture, the one you see above.

I have no idea if Geof actually saw us and thought we were crazed stalkers or not since it looked like he was just heading out to run an errand, but we didn’t want to take any chances. After all, all we were doing was ….. oh wait, maybe we are crazed stalkers.

Regardless, on Thursday we will get to officially meet this incredible crew and explain to them our little adventure, and also get some decent pictures!

I will be back in touch soon. Until next time, God bless and sweet dreams.