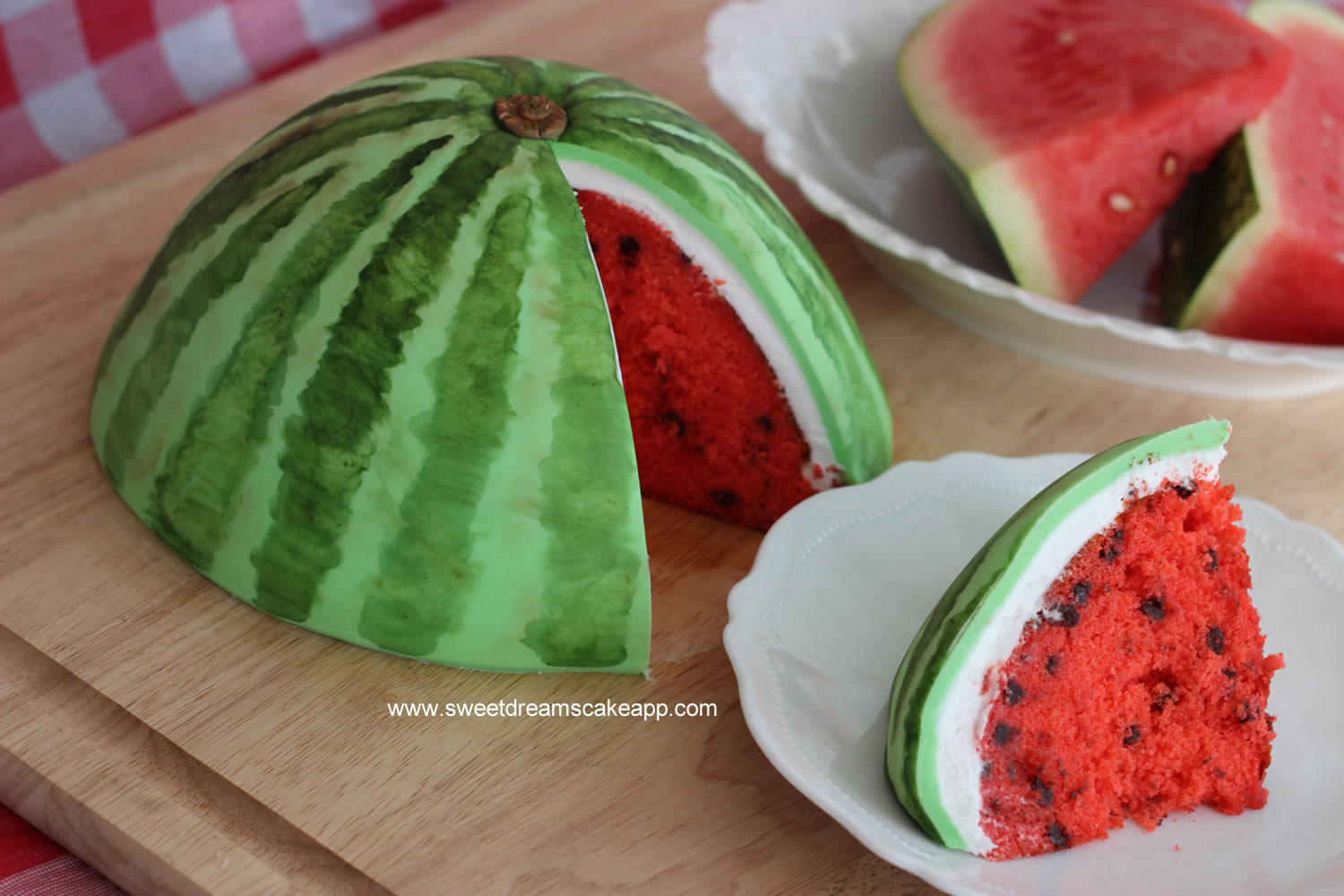 Summer’s end is drawing near and, in our family, that means time for watermelon. We are all huge watermelon lovers and it seems like watermelons are always sweetest towards the end of summer. The other day I had cut a watermelon in half and was getting ready to slice it up when I started looking at it and thought, “That would make a neat looking cake.” As my brain took hold of the idea, I began to wonder if I could make the inside look like a real watermelon, as well as the outside. Then I took it even further and decided that if it is going to look like a watermelon, it should also taste like a watermelon.

After some experimentation, here is what I came up with; a watermelon cake that looks and tastes like real watermelon. I was super excited because it turned out even better than I had envisioned.

In keeping with total disclosure I have to be honest in the fact that I wasn’t thrilled with the taste of the cake. It had sort of a bitter aftertaste. I’m not entirely sure, but I think that was because of the amount of red food coloring I put in the batter. I used No Taste Red paste color

but even that can have a bitter taste if you use enough of it. After seeing how bright red the cake turned out I think I could have gotten by with a lot less coloring and still had a beautiful cake that probably would have tasted better. I served it to some friends and they didn’t seem to think it tasted bad. They even had seconds, but I guess I have eaten enough cake over the years that things like that really bug me. Also, the watermelon flavor didn’t really seem very noticeable. That could be because the food coloring sort of overpowered it but I think watermelon is such a mild flavor that it is hard to make it stand out in cake. If I do this again, I will use less food coloring and possibly add some watermelon extract to see if I can intensify the flavor. Or, I may just forgo the whole watermelon flavor and do a red velvet cake. That would be just as beautiful as well as super yummy.

When I had decided on attempting a watermelon flavored cake I did some searching online and came across several different recipes. It was important to me that I use some real watermelon in my recipe so I only used recipes that included at least a little fresh watermelon. The first two recipes I tried were huge failures. It is likely that it wasn’t actually the recipe’s faults, though, because I had also decided to bake the cake in a Pampered Chef Batter Bowl, to give it the rounded shape. I have baked cakes in that bowl before and not had a problem but both of these cakes sunk terribly in the middle. When I made my final attempt with the third recipe I decided to use my Wilton Wonder Mold pan

instead of the Batter Bowl. The nice thing about the Wonder Mold pan is that it has a center heating element which helps bake the center of the cake and keep it from falling. So, I don’t know if it was the recipe, the pan, or a combination of both, but fortunately it all worked on my third and final attempt. Also, the other thing that I liked better about my third recipe was that the batter was thicker than my first two recipes so the chocolate chips did a better job of staying mixed throughout the cake while it baked. 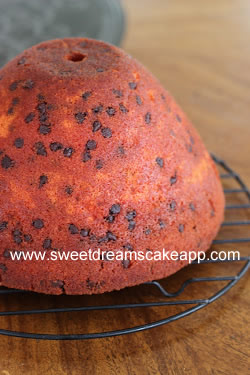 One tip for baking a cake with chocolate chips is to coat the chips in some flour or dry cake mix before mixing them in the batter. This helps them keep from sinking to the bottom of your pan while baking. 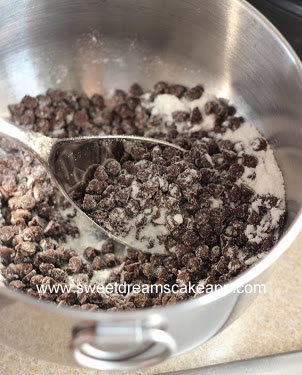 Here are the instructions for baking and decorating a watermelon cake: 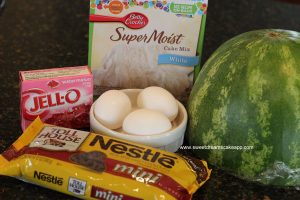 , a box of watermelon Jell-O mix

Click here for a printable form of the recipe.

Once you have removed the cake from the oven, allow it to cool in its pan for about 10 minutes then remove it from the pan and let it cool completely on a cooling rack

. Cakes that are thick like this one take a lot longer to cool than a normal round cake so be sure to allow plenty of time. I think I let mine cool for over 2 hours.

Make sure the cake is completely cool before you start carving. I would suggest baking it the night before and then covering it in plastic wrap and refrigerating it overnight before carving. I didn’t have the time for that since my company was going coming over that evening so I just carved it as soon as it was cool enough to hold together. The fact that it wasn’t cold, as well as all the chocolate chips in the cake, made for a sloppy carving job but, fortunately it was still workable. 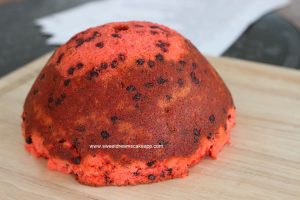 Place the cake on a cake plate (I used a cutting board for my cake plate) then ice it with a buttercream icing. I used a shortening based icing because I wanted it pure white so that it would look like part of the rind when cut. Click here for a pure white buttercream icing recipe. I only made a half batch of the recipe for this cake. Try to get your icing as smooth as possible so you have a nice flat surface for the fondant. One trick for smoothing your icing is letting it set till it is dry to the touch then taking a smooth, non textured paper towel, place it on the cake and use the heat from your hand to gently rub over the towel and smooth out your icing. 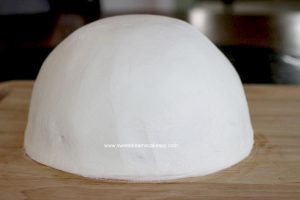 Place cake in the freezer for about 10 minutes to firm it up while you roll out your fondant.

Take about a pound of white fondant

paste colors into the fondant to get the lime green color. Roll out fondant then cover the cake. Gently rubbing a damp paper towel over the icing first will help the fondant to attach better. Smooth it down with your hands or fondant smoothers 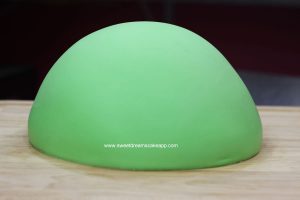 Now comes the fun part, painting the rind. First use a round decorating tip to make an indention on the top of the cake to give you a guideline for where the center is. Mix some Moss Green

paste color with a small amount of Vodka or Everclear (you can also use lemon extract if necessary). With a clean paintbrush that is only used for food, begin painting the food coloring onto the rind starting at the top center and working your way down to the bottom. Use a sweeping, back and forth motion with the brush. At first the line will be a little dark. Let it dry for a minute then dip your paintbrush into some water and go back over it in the same motion. The water will cause the food coloring to bleed and fade. 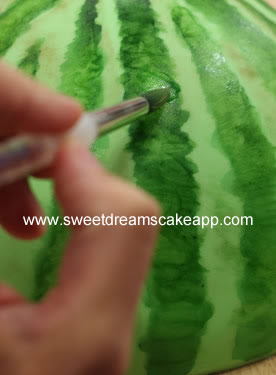 Continue around the cake adding more lines from the top to the bottom. There will be large spaces in between the lines so go back to those spaces and start adding new lines that start lower on the cake but still go down to the bottom. Fit in as many lines, at varying heights, as you need to give it a realistic look. It helps to have a real watermelon next to you to use as an example. When all the lines are on add a circle of coloring right around the top center area. (See picture in Step 8 for example)

Real watermelons always have some brownish coloring on them. Adding the brown is a small detail that really adds a huge touch. Take another clean paintbrush and dip it into some Chocolate Petal Dust. Shake off the excess then begin to tap it on to the cake. Use a combination of taping and sweeping motions with the brush to apply it heavier and lighter in different spots around the cake. 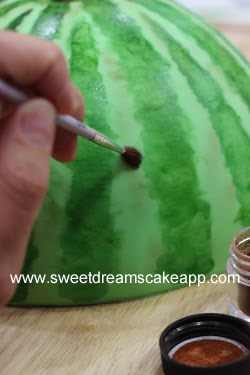 Again, it helps to have a real watermelon next to you to give you and idea of how much brown to apply.

The final touch on the cake is making a realistic looking stem piece to place on the center spot. Take a small ball of fondant and color it light brown with brown

paste color. Roll it out then use a large round decorating tip

to cut out a circle. Attach it to the center of the cake with a small amount of water. Add another small ball of fondant to the top of the circle, attaching with a dab of water. To rough it up, use the tip of a knife to make cuts all over it. Brush it with Chocolate petal dust and then finish by painting tiny amounts of Moss Green food coloring in the cut marks. 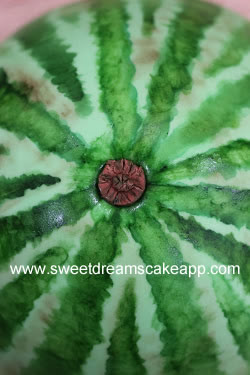 Now you have an amazingly real looking watermelon cake. 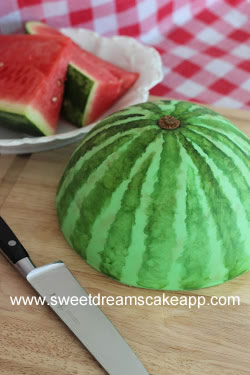 Your guests will be amazed at how great it looks on the outside, but just wait until you cut them a slice! 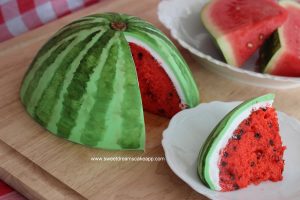 The inside is almost more amazing than the outside of the cake. 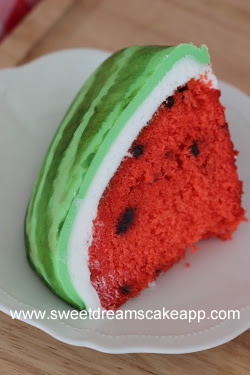