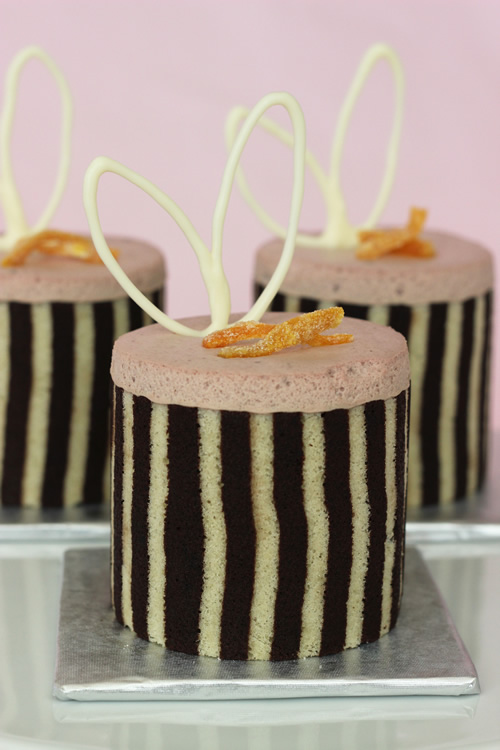 I have seen different joconde cakes over the years and have always been amazed at how beautiful and mysterious they are. “What is a joconde cake?” you ask; it is basically a decorative almond flavored sponge cake that is wrapped around layers of creamy fillings. The thing I have always loved most about them are the stunning designs that can be created in the sides of the cake.

Recently, Amelia Carbine of CakeFu, posted some pictures on Facebook of joconde cakes she was making for an event. They immediately caught my eye and I started wondering if it was something I would be capable of doing. They looked difficult but Amelia promised to post instructions in her blog so I decided to take on the challenge and attempt them for my family’s Easter meal this year. I used Amelia’s cake recipe and found my own filling recipes.

I was pleasantly surprised at how relatively easy they really were. I say “relatively” because they aren’t something that I would take on as a first time baking project. I would suggest that you have some baking experience behind you before attempting them but don’t let them intimidate you either. With the right tools, they really are easier than you might think.

I filled my cakes with white chocolate mousse, orange passion fruit cream and pomegranate mousse. Here is what the inside looked like. 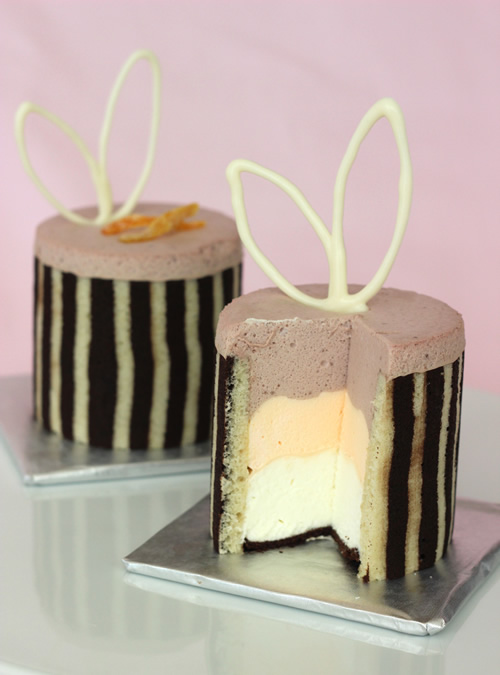 Aren’t they beautiful? I topped them with white chocolate bunny ears and candied orange peels.

I loved everything about them except for the pomegranate mousse. I’m not going to even bother sharing that recipe because I really didn’t like how it turned out. I made two different batches of it and one turned out clumpy and the other was smoother but the coloring in it was spotty and I wasn’t thrilled with the taste. If I make these again I will definitely search for an alternative. The white chocolate mousse and orange passion fruit cream were amazing though and made up for what lacked in the pomegranate mousse.

Amelia’s recipe for the joconde cake was very tasty. You can find that recipe at this link. One note on the recipe is that the ingredient list calls for almond and vanilla extract but they are not mentioned in the instructions. Just add them after adding all the eggs in step 8. Also, she includes instructions for a compote and mousse. I did not use those since I was doing my own fillings but I am sure they are amazing since Amelia is an incredible baker.

Here is the technique I used to make my stripped joconde cakes.

After making the joconde paste, I used an angled spatula

to spread a thin layer of the paste, about an 1/8″ thick, over a Silpat mat

. You can’t see the mat in this picture because it is completely covered by the paste. I have also seen that some people use parchment paper for this but I don’t recommend that because the parchment ends up creating lots of wrinkles in your cake while it bakes. 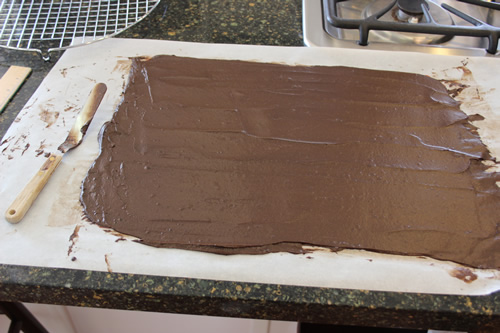 I then took an adhesive spreader

(you can get these at any hardware store) and dragged it through the paste, pushing the excess off the mat. I continued down the mat with the spreader until the entire mat was stripped. To make sure you keep your stripes even when you are starting on a new row, place the top grove of the spreader into the bottom stripe from your last row as you start your new row. 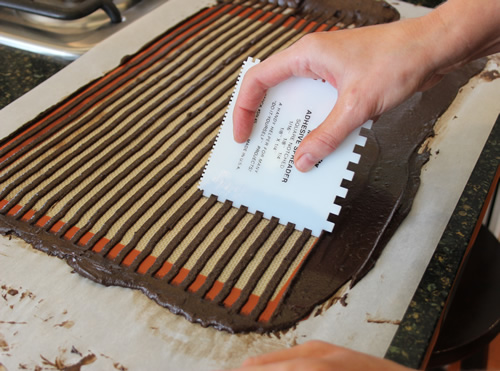 You can see in this picture that I laid a large piece of parchment paper underneath my Silpat mat to make clean up easy afterwards.

When I finished the design I carefully picked up the mat and placed it in a baking sheet then stuck the whole sheet in the freezer for about 20-30 minutes.

While the paste was freezing I preheated the oven to 450 degrees and made the sponge. I then removed the baking sheet from the freezer and immediately spread the sponge on top of the paste in another thin layer. 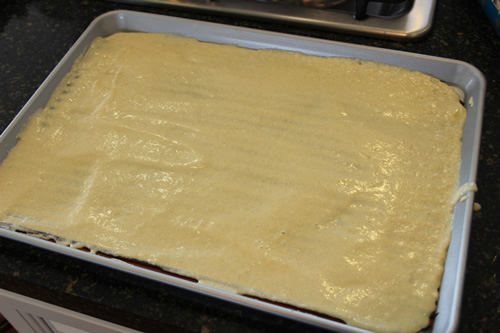 I placed the baking sheet in the oven and baked for 7 minutes. This is a fast baking cake. You know it is done when you can touch the top and it bounces back at you. While it was baking I laid out a clean sheet of parchment paper on the counter and sprinkled it with powdered sugar so that the cake could easily be removed from it later. When the cake was done I allowed it to cool on a cooling rack for about 5 minutes then took a knife and ran it along the sides of the sheet to make sure the cake wouldn’t stick. I then flipped the whole thing onto the parchment paper, removed the baking sheet, then lifted off the Silpat mat. Look at the stunning design! I was so excited at this point that I was literally jumping around the kitchen. 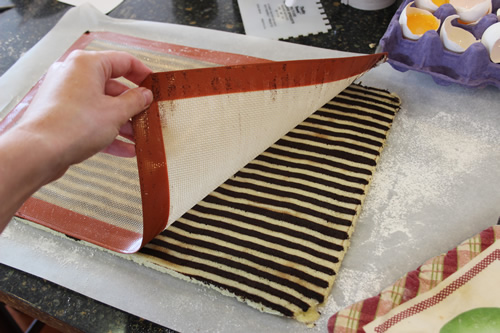 While the cake continued to cool I prepared my molds. Ideally you would use ring molds

to form the cakes in but I didn’t have any so my husband cut up a piece of PVC pipe for me and it worked perfectly. You can make joconde cakes any size you want. Amelia made very small ones for her event and I have also seen an entire large cake wrapped in joconde. For my desserts I used 3″ PVC pipe cut into 3″ lengths.

into 4″ squares and wrapped each square in some cake foil

. I then placed a PVC pipe on top of each cake board and wrapped a piece of waxed paper on the inside of it, overlapping the ends. You can sort of see it in this picture. I tried to cut the waxed paper even with the top of the pipes so that I could later smooth the mousse evenly with the top. 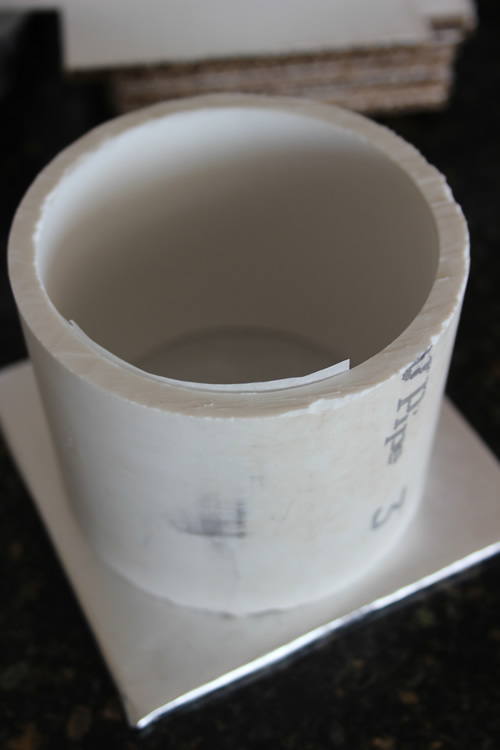 Next I made a pattern for the cake by placing a piece of parchment paper inside the pipe and measuring it so that the ends over lapped just slightly. That gave me the length. I then measured the height at 2 1/2″. I used that height because the pipe was 3″ tall and I wanted some of the pomegranate mousse to stick up over the top of the cake.

I used the pattern to cut out my cake pieces from the large sheet of cake. I laid the pattern down on the cake then placed a metal ruler on top of it to hold it in place while I used a pizza cutter to cut out the strip of cake. I wanted vertical lines so I laid my pattern in the opposite direction of the stripes. If you want your stripes to be horizontal you would just lay it in line with the stripes. 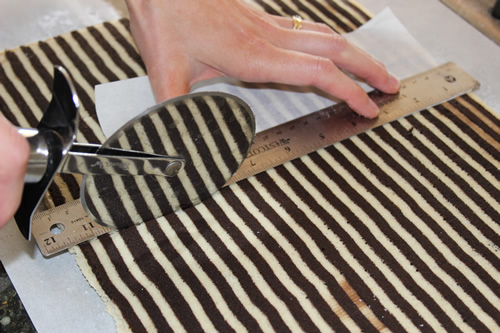 Joconde cake, like all sponge cake, is pretty flexible. I took the strip of cake and wrapped it inside the mold, overlapping the ends and pressing them together. I did have some problems with some of my cakes coming apart at the seams later on so I think I might try adding a dab of melted chocolate to the ends next time to hold them together better. 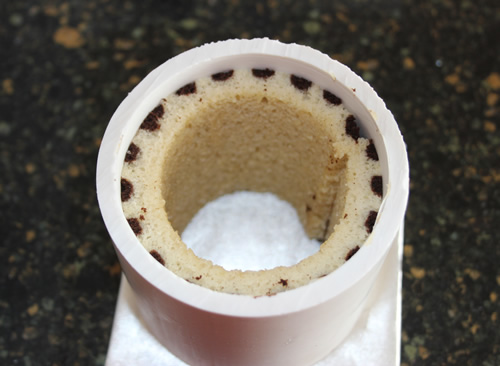 I baked up the remains of my joconde paste by itself and used this as the bottom of my cakes. I used a circle cutter

to cut out cake circles and placed them at the bottom inside each of the pipes. 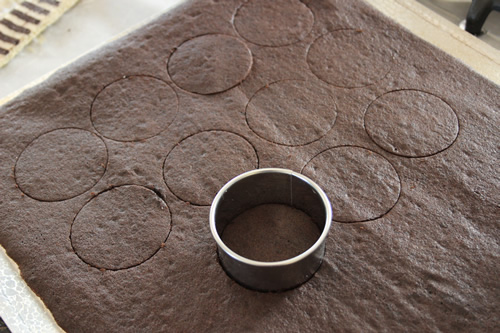 To easily fill the cake, I placed the mousse in a decorating bag

with a round tip

and filled the cake about one third of the way up. 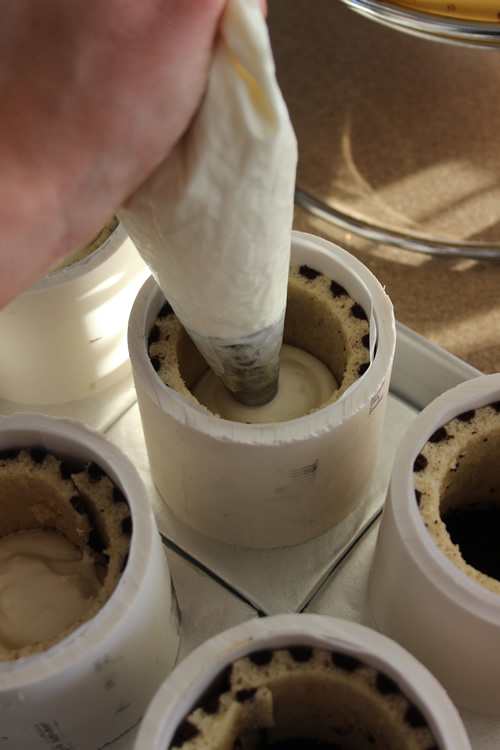 When all the cakes were filled, I placed them in the refrigerator to set up while I made the orange passion fruit cream filling. I had planned on sharing this recipe for you but I have lost it. I had it on my phone and have spent the last two hours searching my browser history trying to find it again but haven’t been able to. I will be sure to update this if and when I find the recipe.

Once again I filled a decorating bag and placed this filling on top of the white chocolate mousse, another third of the way up the cake. Again they went into the refrigerator while I made the final filling, the pomegranate mousse. Like I said before, I’m not going to bother sharing that recipe since I wasn’t happy with it. When I added the final mousse layers I filled them slightly over the top then used a spatula to spread them evenly along the top, scraping off any excess over the side of the pipe.

I left them in the refrigerator over night to set up completely. The next day I carefully removed the pipe molds and waxed paper to reveal my beautiful cakes.

Since it was Easter I melted some white chocolate, placed it in a decorating bag fitted with a #3 round tip

, and piped out bunny ears on waxed paper. You can read more on making chocolate embellishments here. Once they had cooled completely I placed them in the cakes. Finally, I added a couple of pieces of candied orange peel to each cake. I had made the candied orange peel the day before. It takes a little bit of time so be sure to have it done ahead of time. Here is a link on how to make candied citrus peels.

And, once again, here is the final result. 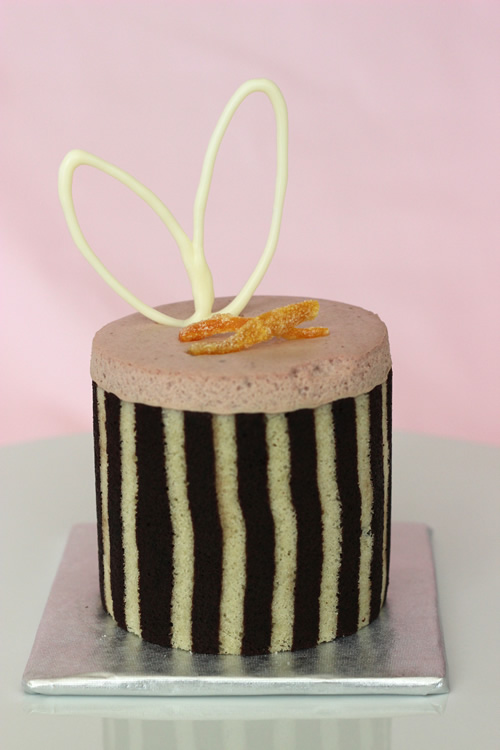 I was really happy with my first attempt at these fascinating little cakes. I can’t wait to try a new design next time. I hope all the steps didn’t scare you away and that you are willing to try your own joconde cake. If you do, please share a picture of it on my Facebook page. I love seeing your creations.