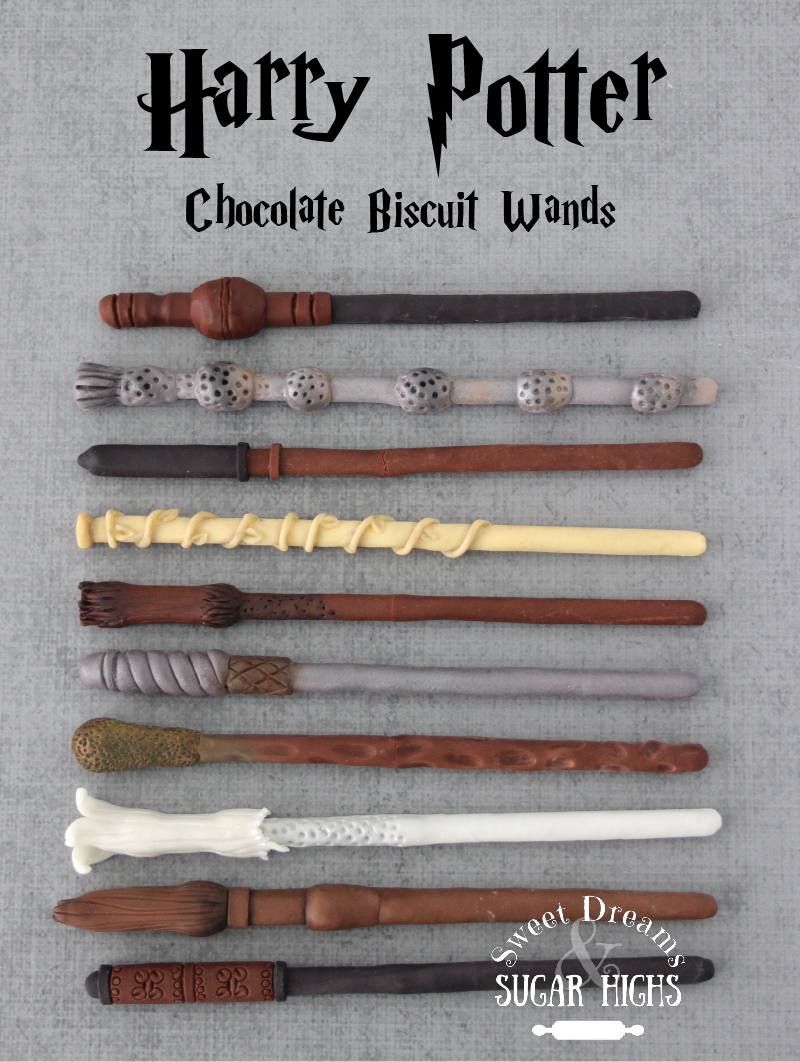 Any Harry Potter fans out there?! I’ve been immersed with all things Harry Potter lately so I wanted to share my latest creations with you as well as a short tutorial.

My friend’s daughter turned 13 a couple of weeks ago. She is a huge Potterhead so her mom asked me to make cookies and wand treats to serve during her Harry Potter themed birthday party. She gave me free reign on both the cookie designs and on creating edible wands.

To be honest, I had only seen a couple of the Harry Potter movies, and that was years ago, so I was kind of lost as where to begin. I decided that I better do some research if I wanted to make treats that would impress a hard core Potterhead. So I went to my local library and borrowed every single one of the Harry Potter movies then binge watched them over the next several days. I didn’t get much of anything else done in my life but I got a good understanding of the story of Harry Potter and felt prepared to create some birthday goodies that this wizarding teenager would love.

Here are the decorated cookies I created. The birthday girl favors the house of Slytherin so I used the Slytherin house colors for my color scheme. 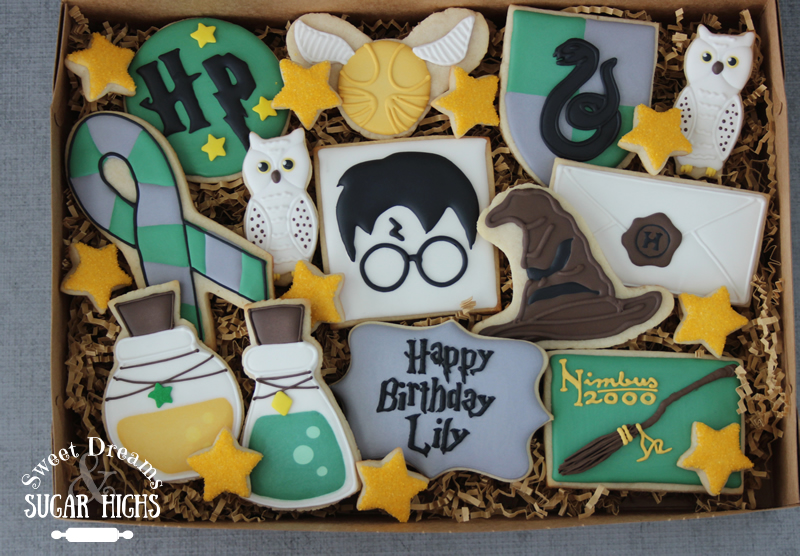 I racked my brain for a while on how to best make edible wands. I thought about using pretzel rods but I wanted to make them look realistic and I was afraid that the rods would end up being too thick by the time I added other details. After searching the grocery store for cookies and candies that might work, I settled upon using Pocky Biscuits. You can find these in the Asian food section of most grocery stores. Whenever I create something new, I always learn what not to do along with what to do so I will share that with you later.

Here are the finished wands, all packaged up for party favors. I created bag toppers for each wand with the name of the wand’s owner and their house colors. 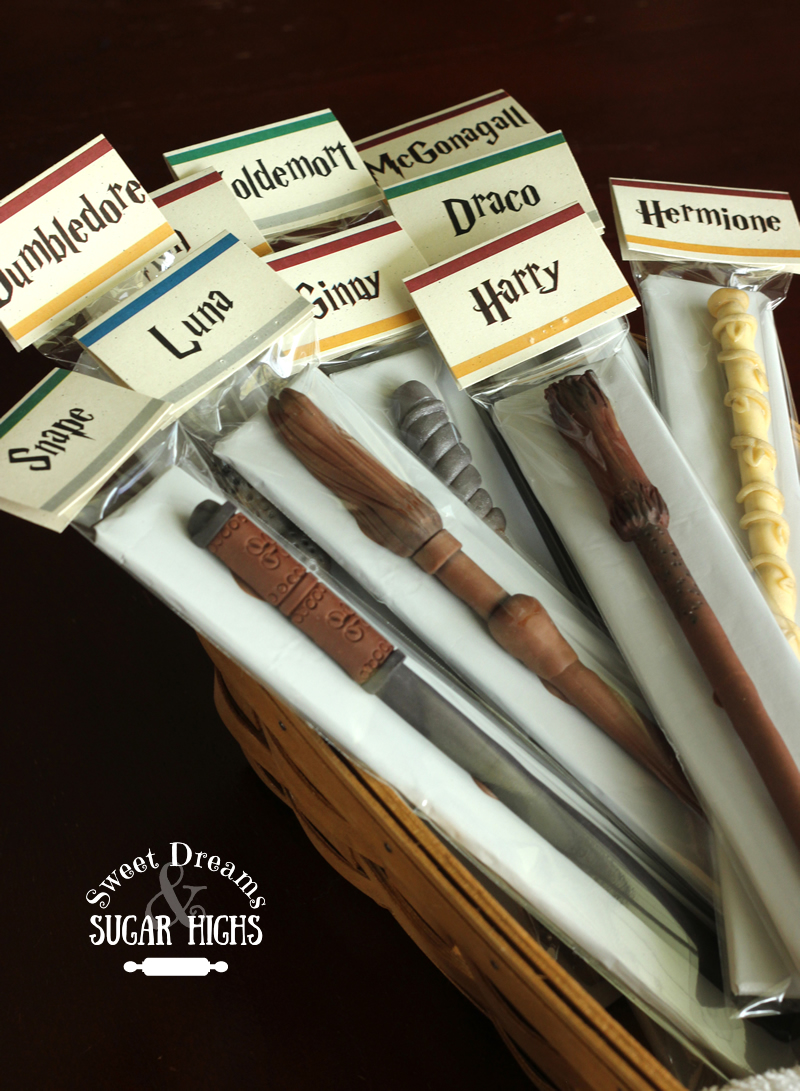 I was really happy with how they turned out, except for the fact that a couple of them split in the middle, as you can see on Draco Malfoy’s wand (third from the right.) More on that later…. 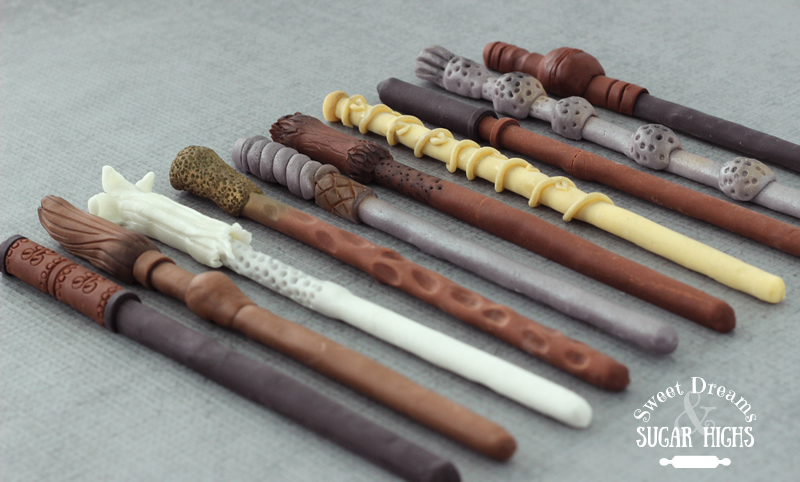 Here is a basic tutorial on how I made the wands. I don’t go into detail on how each particular wand was decorated because I was making it up as I went and ended up just using various sculpting tools to get the looks I wanted. Here is how to get the foundation for a wand, though, so that you can then create any look you want on it.

I started with a box of Pocky sticks and some white and brown modeling chocolate. You can buy modeling chocolate but it is really easy to make and only requires two ingredients; candy coating and corn syrup. Here is a great tutorial from Sugar Geek Show on how to make it if you want to give it a try. 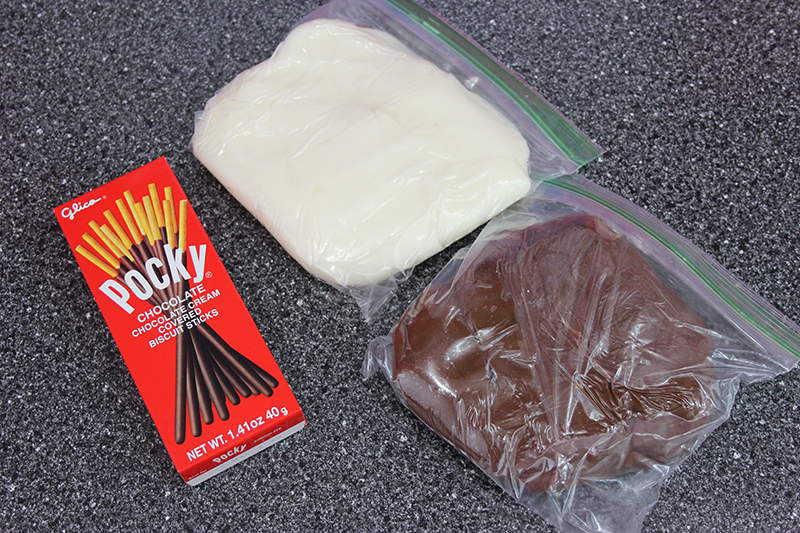 The Pocky sticks weren’t long enough on their own so I needed to attach two sticks together to get the length I wanted for each wand. They would be too long, though, if I used the full length of each stick so I used my knife to cut each one to 4″ long. 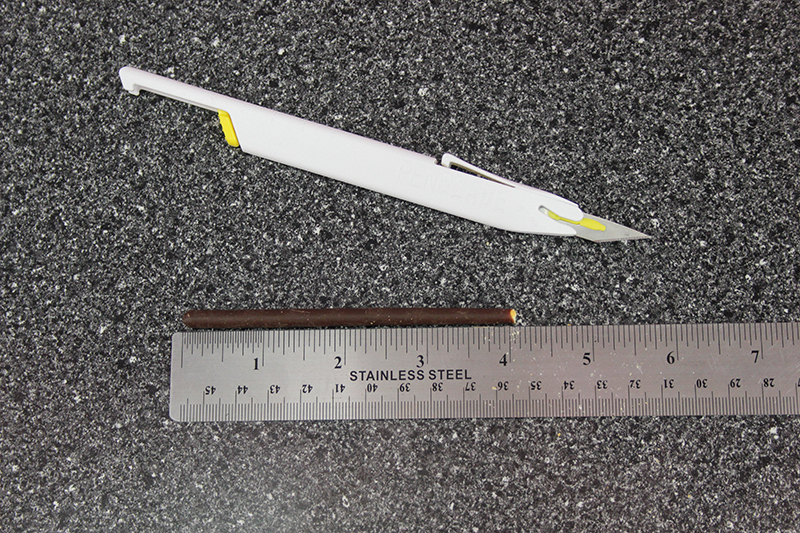 I then dipped the ends of each stick in melted chocolate and attached them together. You can probably already guess where my problem occurred. The tiny amount of chocolate I used to adhere the two sticks was not strong enough to keep them from eventually breaking. I didn’t think it would be a problem since I was going to wrap them in modeling chocolate but it was and, like you saw earlier, I ended up with a couple of them cracking on me. If I do it again, I will probably pipe a continuous line of chocolate the entire length of the stick, on top and bottom, to give them more support. 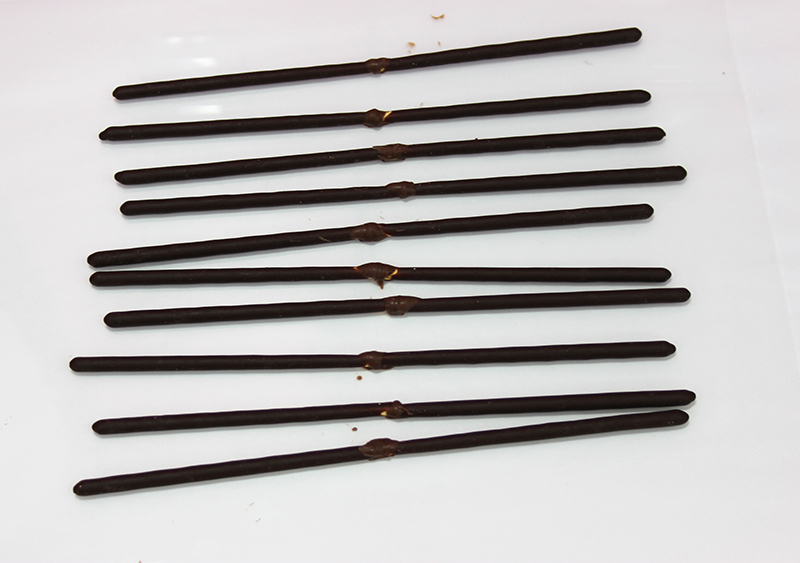 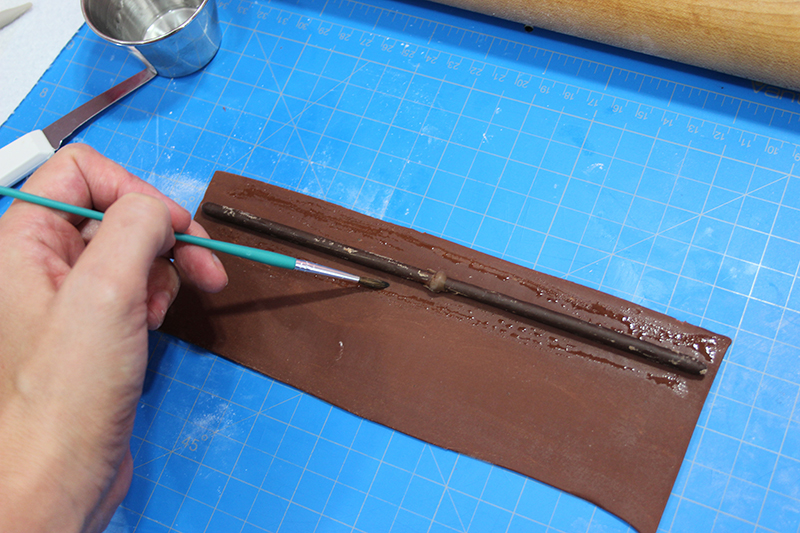 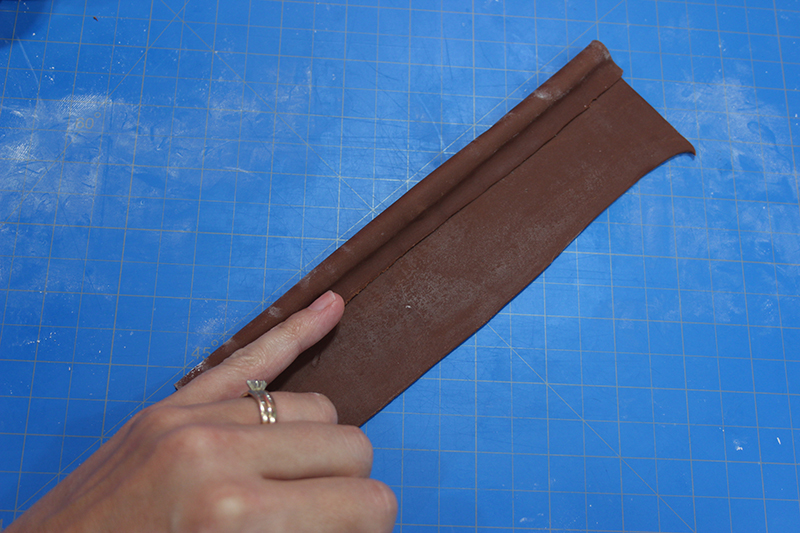 I took a knife and cut off the excess modeling chocolate. Make sure that you press tightly in the prior steps so that the chocolate edges don’t come undone once the excess is trimmed away. If they do, just use your finger to smoosh them together. 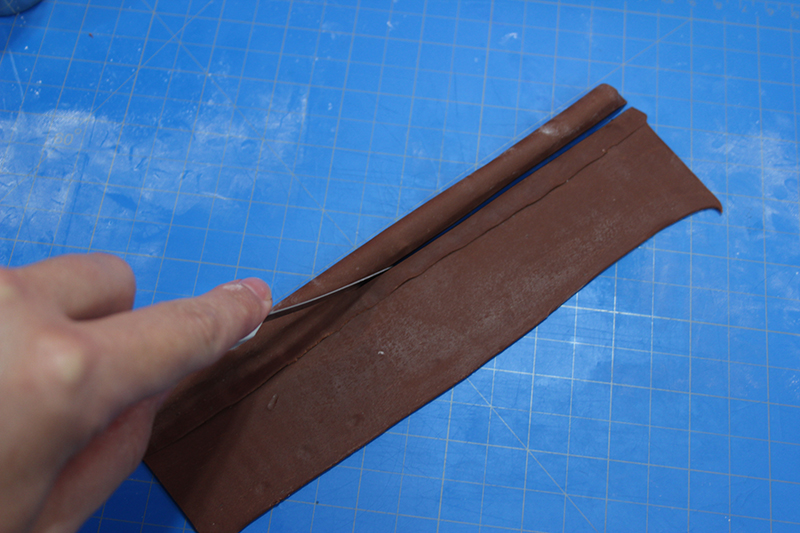 I finished it off by pressing the ends together and smoothing them till they gave a rounded shape and then rolled the wand back and forth along my mat a few times (like when you are rolling a snake out of clay) to make sure it was even and all the lumps got smoothed out. 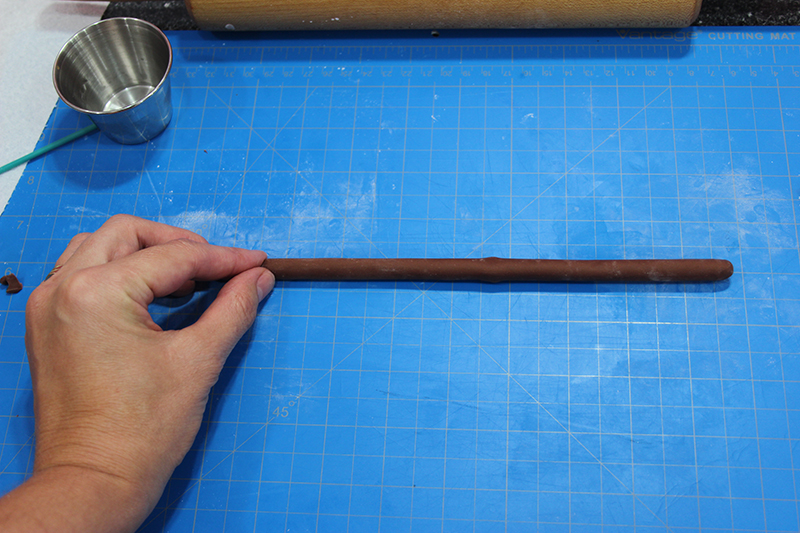 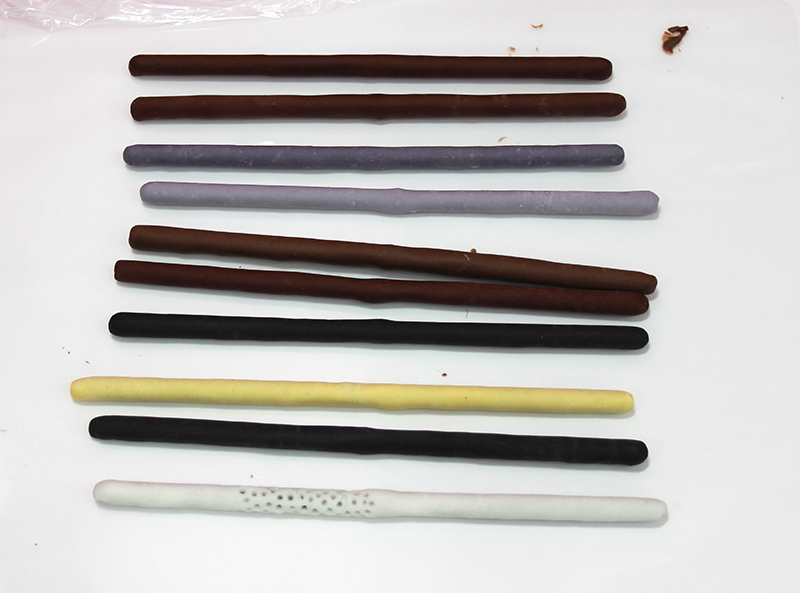 To decorate the wands I used a variety of different sculpting tools and knives to get the various looks I wanted. 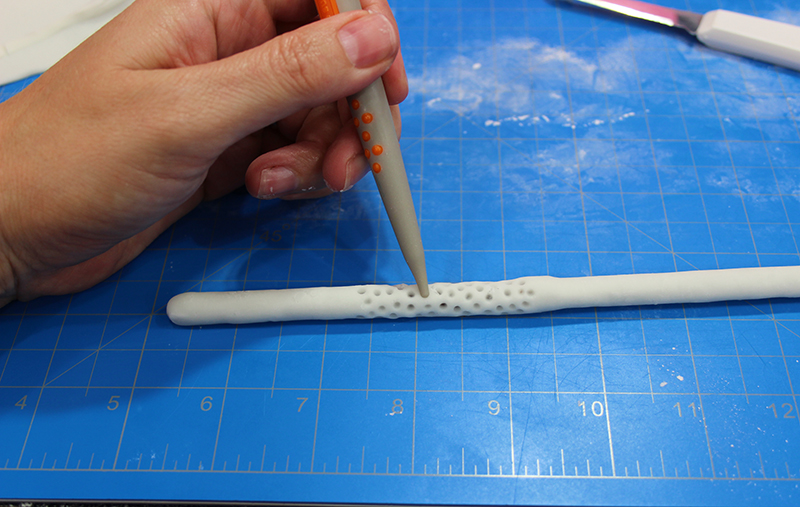 When I needed to attach balls or cones, I would roll out some additional modeling chocolate to the shape I wanted… 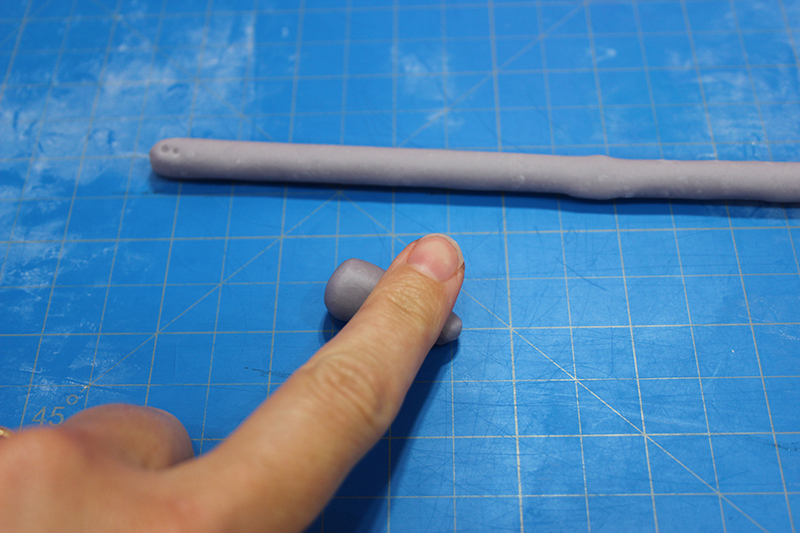 Then used my knife to cut into the shape about half way into it. I then opened spread the shape apart at the cut and wrapped it around the wand, using my fingers to press it into place and reshape it once it was attached. 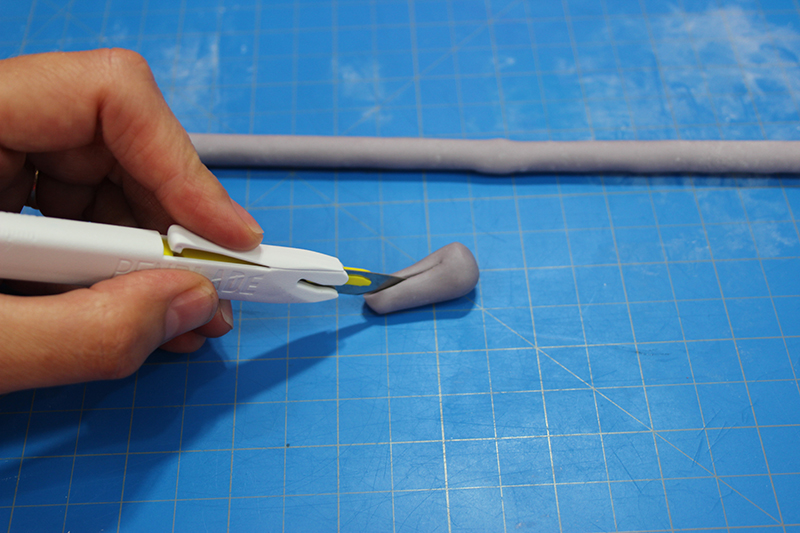 I added some additional color and shading to the wands with petal dusts by using a dry paint brush to brush them on. 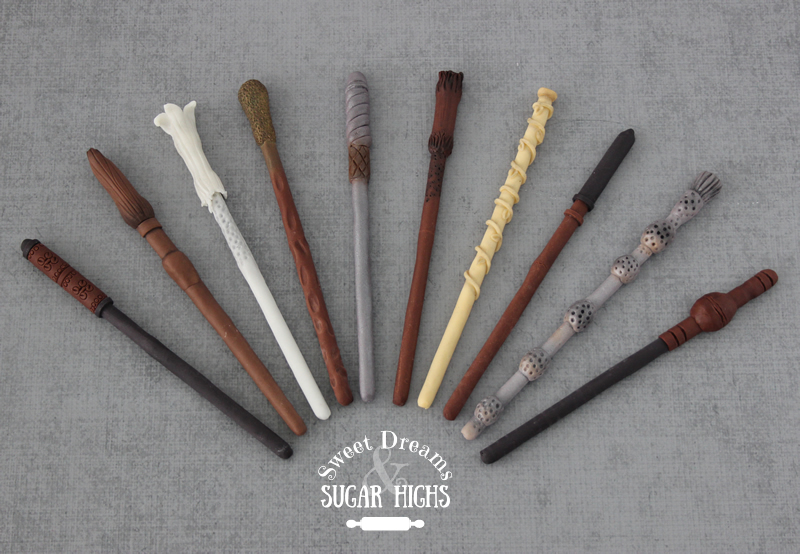 I allowed them to dry for a couple of days before packaging so that the modeling chocolate had time to firm up. Since they were pretty fragile, and they had to travel across country, I wanted to make sure they would be securely supported in their bags. To do this, I cut cardboard cake boards to fit the clear bags then covered them in Fanci Foil. I then used a few dabs of melted chocolate to attach each wand to the covered cake board. Finally I topped each bag with a paper topper that had the wand owner’s name on the front and their house crest on the back. 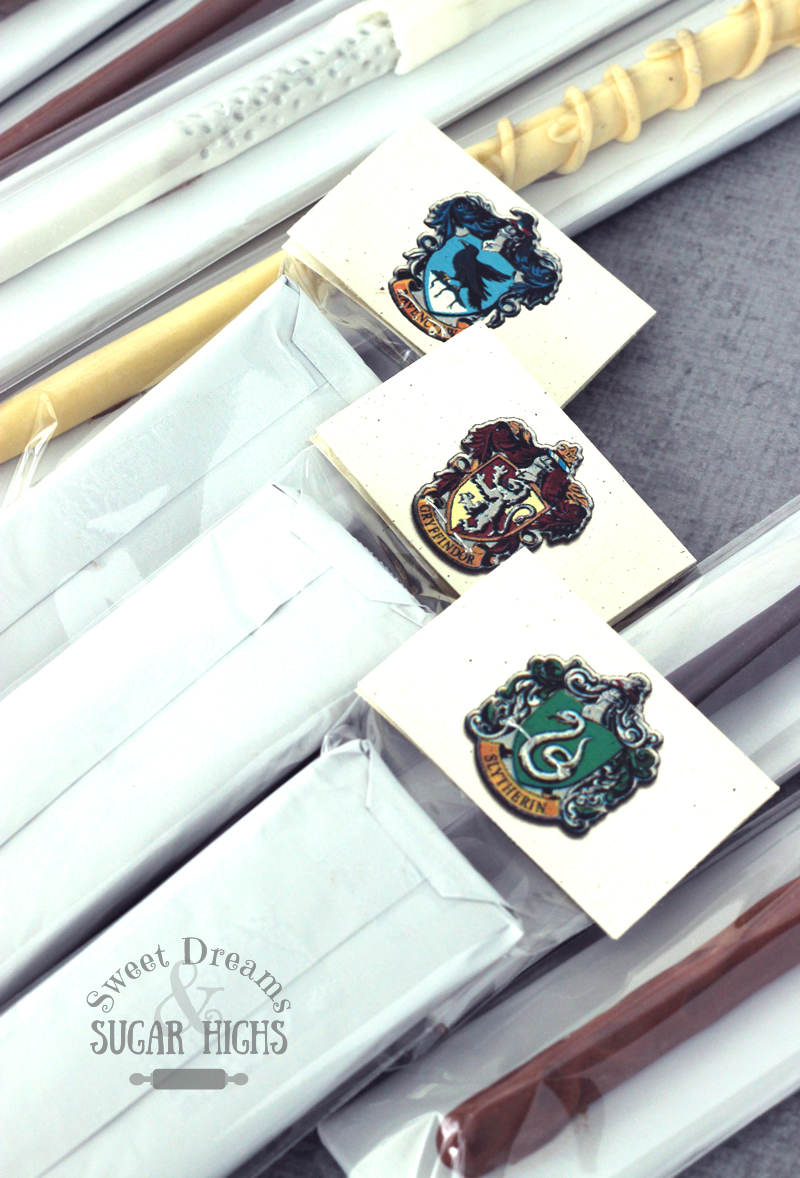 Aside from the cracks that happened before I had even packaged them, the wands survived an airplane flight from Montana to Arizona with no additional damage. And the best part of all is that I got a text from my friend on the morning of the party and she said that her daughter’s eyes filled with tears when she saw the cookies and wands. That right there is why I love baking and decorating.